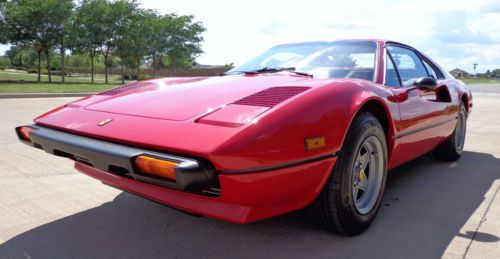 It is a Matching Numbers Car

All original even with the original Stereo is present.

You will not find a cleaner 308 GTB for the money!

SOLD AS IS, WHERE IS.

A Ferrari might be the last vehicle you'd want to be driving when streets are submerged in water, but Toronto lawyer Howard Levitt was unfortunate enough to be behind the wheel of his $200,000+ Ferrari California when the tunnel he was driving through started to fill up. It was July, when parts of the Canadian city were flooded, but he was determined to make his flight to a court appearance the next day. So Levitt abandoned his metallic blue supercar in the middle of the street and took a cab to the airport, the National Post reports.
The car subsequently was totaled, and the insurance company covered the damage, so after completing his court assignment (and a column for the Financial Post that was due the same day), Levitt began to search for a replacement for his California - driving his 1994 Dodge Viper in the meantime. He decided on a 2014 California in the same metallic blue to replace his 2010 model. When he approached Ferrari to put in an order, the Italian marque was waiting for him, having heard of his mishap. The company offered him a "very generous" deal on a 2014 model; an undisclosed amount less than the after-options retail price of around $300,000.
The new Ferrari is expected to be delivered to Levitt in November, and we can only hope another flood doesn't catch him off guard. We're not so sure Ferrari would offer him another "very generous" deal. Feel free to watch the short video below, despite its rather static nature, which we included to precisely show the sad fate of Levitt's fallen California.

Christopher Ward chrono has actual metal from a Ferrari 250 GTO

We've seen watchmakers use all sorts of methods to make their timepieces more attractive to automotive enthusiasts, from carbon-fiber dials and titanium cases to the logos of partnering automakers and racing series. Some have even designed all-new watches to go with a specific make or model. But Christopher Ward has taken things a step further with its latest chronograph.
The new Christopher Ward C70 3527 GT chronometer eschews all the usual gimmicks and goes for a more interesting one: it actually includes in its construction metal taken from the restoration of a Ferrari 250 GTO - namely chassis number 3527 GT that belongs to one Irvine Laidlaw, a Scottish nobleman and one of the wealthiest individuals in the UK.
When Baron Laidlaw bought his GTO in 2005, he sent it in for a thorough restoration that involved replacing some corroded and damaged exterior body panels. The discarded metal was acquired by TMB Artmetal, which specializes in that sort of thing, and partnered with Christopher Ward to create this limited-edition timepiece. The metal was used to make the back plate on which the number 6 - in homage to 3527's iconic 6 GTO license plate - is etched by laser and placed under museum-grade sapphire crystal.

He may not have known it at the time, but James Glickenhaus started a small revolution when he commissioned Pininfarina to turn his Ferrari Enzo into a tribute to the legendary 330 P3/4. The P4/5 is what resulted, and Ferrari gave its blessing for it to wear the Prancing Horse emblem - something it hadn't done for a coachbuilt custom in decades. A slew of rebodied Ferraris followed, prompting the factory to launch its own coachbuilding division. But Jim wasn't out of the picture.
The former Hollywood filmmaker and investment banker followed up with the P4/5 Competition based on the 430 Scuderia, and started Scuderia Cameron Glickenhaus to race it. Now SCG is returning with a new project, and has released this teaser video (which you can view in the embedded Facebook post below) to keep us on our toes.
From the few glimpses the video provides of a rendering, it's hard to tell much, but from what we can see, it looks pretty slick. Just what sort of technical details will form the underpinnings remains to be seen, but we're looking forward to seeing how it turns out.