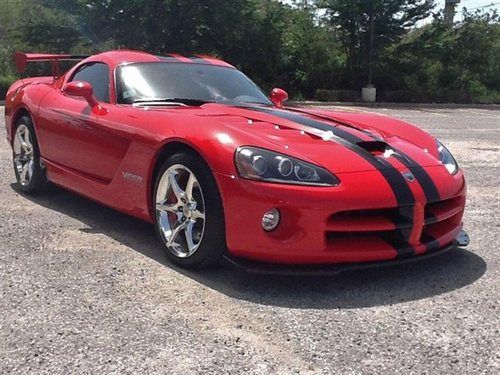 Condition: UsedA vehicle is considered used if it has been registered and issued a title. Used vehicles have had at least one previous owner. The condition of the exterior, interior and engine can vary depending on the vehicle's history. See the seller's listing for full details and description of any imperfections.Seller Notes:"Extra Clean Vehicle"

6 speed manual! One hot car! In Triangle Chrysler Jeep Dodge de Ponce we have a wide variety of used cars on inventory like this Dodge Viper. Come see the wide line Chrysler like the Chrysler Town and Country, Crysler 200, Chrysler 300 and the Dodge line like Dodge Avenger, Dodge Caliber, Dodge Charger, Dodge Challenger, Dodge Durango, Dodge Nitro, Dodge Grand Caravan, Dodge Journey and Dodge Ram. We also have the line Jeep as the Jeep Wrangler, Jeep Wrangler Unlimited, Jeep Patriot, Jeep Liberty, Jeep Compass and the sensational Jeep Grand Cherokee.<Br/>. Dodge has done it again! They have built some terrific vehicles and this terrific-looking 2009 Dodge Viper is no exception. If your daily drive has been boring you to death, this powerful car is just what the doctor ordered. It is nicely equipped. Come and see the Chrysler, Jeep, Dodge, Ram difference. 787-677-2637 or 787-448-1520.