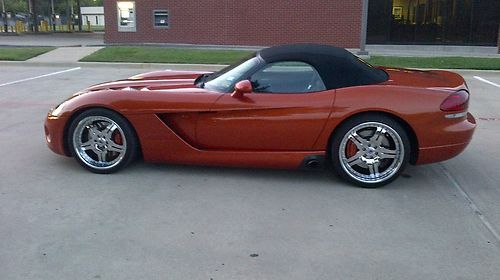 Condition: UsedA vehicle is considered used if it has been registered and issued a title. Used vehicles have had at least one previous owner. The condition of the exterior, interior and engine can vary depending on the vehicle's history. See the seller's listing for full details and description of any imperfections.Seller Notes:"This vehicle is in good condition."

I am selling my 2005 Dodge Viper Copperhead Edition with 87k miles.  This cars runs, drives and looks great.  Upgrades includes 19x10 front and 20x13 rear 3-piece Asanti wheels and upgraded vented 2006 and newer hood.  The vehicle has been in an accident with only body damage which actually added up quickly.  The front and rear fender panels as well as the front headlight was damaged.  The vehicle was restored to like new condition.  Expect normal wear because the car has been driven as that was the reason for purchase.  This car has never been abused which is evident by the tires which are 2 1/2 years old and were added to the car shortly after I purchased it.  This is my 3rd Viper so the need for joy riding and abuse was not there.  The stock radio has been replaced but will come with the vehicle.  Please email for any questions.   A couple of items to note: The abs light is on; however the dealership has replaced the unit. The gas gauge reads 1/4 tank incorrect.