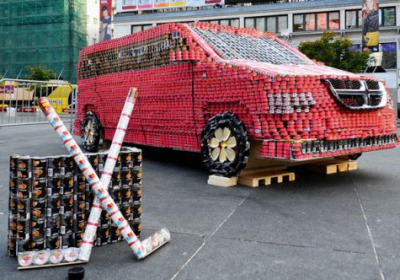 There are lots of ways to celebrate an important birthday, and all of them are well deserved. You can throw a big party, buy yourself something nice, or – if you're the altruistic type – do something for others in need. The latter is how Chrysler has opted to mark the 30th anniversary of its Dodge Grand Caravan and Chrysler Town & Country.

Together with hunger-advocacy organization Canstruction, the Chrysler Foundation has built a full-scale replica of the Grand Caravan out of 30,000 food cans in the square at the corner of Yonge and Dundas in Toronto, a ways down the highway from where the real vans are built in Windsor. The sculpture was built over the course of 10 hours by 30 volunteers and was displayed earlier this week.

Now the installation is being taken down, and the cans of food are being donated to the Daily Bread Food Bank, which will assemble them into 2,000 food baskets to be distributed to those in need through its network of 200 food banks across the Canadian metropolis. Check out a neat time-lapse video of the build and the press release below.

- Dodge Grand Caravan and Chrysler Town & Country celebrate 30 years of minivan leadership
- Life-size replica of Dodge Grand Caravan built in Yonge-Dundas Square in Toronto, made entirely out of canned goods (30,000)
- The Chrysler Foundation partners with Canstruction®, an international non-profit organization that aims to raise awareness for hunger and poverty, along with science, technology, engineering and math principals, plus community service
- Dodge Can'avan will be donated to Daily Bread Food Bank – the 30,000 cans will help provide almost 2,000 food hampers to people in need inToronto

October 28, 2013 , Toronto - Rarely have vehicles created a new segment, stood the test of time and become so much a part of so many Canadian families as the Dodge Grand Caravan and Chrysler Town & Country. The Windsor, Ontario-built minivans officially celebrate their 30th anniversary on November 3, 2013.

To commemorate the milestone anniversary, The Chrysler Foundation partnered with Canstruction®, an international organization dedicated to raising awareness of hunger and poverty issues, along with the importance of science, technology, engineering, math principals and community service. A life-size replica of a 2014 Dodge Grand Caravan was built in Toronto's famous Yonge-Dundas Square, made entirely out of packaged food products.

It took 30 volunteers – including local high school and university students -- more than 10 hours to build the 30,000-can sculpture, which will be on display in Toronto, Monday, October 28, and Tuesday, October 29.

Once dismantled, the food products will be donated to Daily Bread Food Bank, which provides food to more than 200 food banks and meal programs across Toronto. This donation will provide 2,000 food hampers for people who rely daily on local food banks. Daily Bread says the average food bank client spends more than 70 percent of their income on housing, leaving less than six dollars a day for food, transportation, clothing and other basic needs. One-third of people who rely on food banks are children.

A 30th anniversary 2014 Dodge Grand Caravan will also be on display at the site, to serve as a collection bin for a community food drive, also benefitting Daily Bread Food Bank.

"We created the minivan segment 30 years ago, and since then more than 13 million customers around the world have entrusted Dodge and Chrysler minivans with their family transportation needs," said Reid Bigland, President and CEO, Chrysler Canada. "Not only does this Canstruction project give a nod to a milestone anniversary for some of our most important products, but it also serves as a tool to raise awareness for issues of hunger and poverty within our country. At the same time, it demonstrates to the students involved how critical -- and fun -- subjects like math, science, physics, design and engineering can be – because without those core fundamentals, our Dodge Can'avan couldn't have been built."

"Canstruction is excited to partner with The Chrysler Foundation to commemorate their 30th Anniversary of the Dodge Grand Caravan," said Carrie Kirk, Executive Director of Canstruction, Inc. "This life-size Grand Caravan will not only provide food for Toronto's Daily Bread Food Bank, but also inspire the next generation of Science, Technology, Engineering and Math (STEM) professionals. Our team of 30 STEM-focused youth volunteers had the opportunity to learn "hands on" engineering, construction and project management skills, all while giving back to the community. We're thrilled to be working with a company which shares the same passion and vision for fostering a creative and philanthropic community."


About Dodge Grand Caravan
More than 13 million minivans have been sold by Chrysler Group since it created the segment in 1983. It is credited with creating 78 minivan segment firsts, such as class-exclusive Stow 'n Go seating and a segment-first Blu-ray rear-seat entertainment system. The 2014 Dodge Grand Caravan – Canada's best-selling minivan - continues to innovate in the segment it created and offers an unprecedented level of functionality, convenience, safety and value. With a starting Manufacturer's Suggested Retail Price (MSRP) of $19,895 (excluding destination), the Dodge Grand Caravan is one of the most affordable seven-passenger vehicles in Canada. Its standard, award-winning Pentastar 3.6-litre V6 engine delivers a best-in-class 283 horsepower and a tow rating of 3,600 lbs. Grand Caravan features a segment-exclusive fuel economizer mode and return up to 7.9 L/100 km, or up to a 955 kilometre driving range. This IIHS Top Safety Pick also has more than 45 safety, security and technology features, and a 5-year/100,000-mile powertrain warranty.


About The Chrysler Foundation
The Chrysler Foundation, the charitable arm of Chrysler Group LLC, has established a proud legacy of empowering people and investing in local communities. The Chrysler Foundation focuses its support on four key areas: Education: K-12 and post-secondary education initiatives that encourage the study and pursuit of careers in business, design, science, technology, engineering, mathematics or supply-chain management; Military: support for the nation's service members and their families in need; Multicultural / Diversity: initiatives that promote inclusion and advancement opportunities for diverse populations; and Youth Development: organizations and programs that provide mentoring and related assistance to aid youth in the transition to adulthood.

Since its inception in 1953, The Chrysler Foundation has awarded more than $500 million in charitable grants.


About Canstruction Inc.
Canstruction Inc. is a nonprofit charity founded in 1992 and headquartered in Atlanta, GA, USA. Events are hosted around the world to help raise awareness of hunger issues through the creation of structures made entirely out of canned food. Canstruction Inc. focuses on promoting basic math and advanced Science, Technology, Engineering and Math principals while instilling the importance of community service in children. Canstruction has help to donate over 21 million pounds of food since 1992 in over 150 cities around the world. To learn more visit www.canstruction.org

More than just a food bank, Daily Bread also works to support people struggling with hunger by providing job training; researching and educating people on issues around poverty and moving forward with innovative and realistic solutions that will help people break away from poverty. Find out more about Daily Bread Food Bank at www.dailybread.ca.