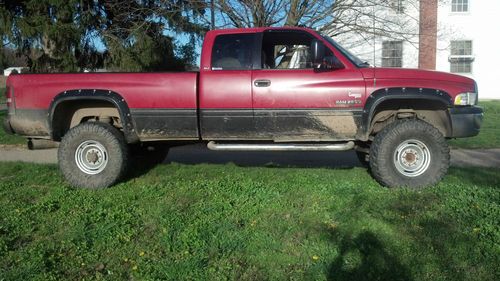 Up for auction is a 1997 Dodge Ram 2500 Extendedcab SLT 4x4. The truck has 158,000 miles which is just getting broke in forthese Cummins engines. The engine starts up and runs great, she has a lot ofpower. I bought this truck from a diesel mechanic and as a daily driver butdecided to start building it up. Just had my first son last week and realizedthe truck is not going to be practical without having a club cab hinse thereason for sale.

It has an HX 40 turbo with a bigger intake.

The fuel pump is turned up and fuel plate is shavedat #100 were it has the little sliver on the bottom with advanced timing. Yesit rolls the coal but gets decent fuel mileage if you’re easy on it.

It was an automatic and had the 5 speed conversionkit done right. I just put a new clutch in 2 months ago.

It has a full 5" MDRP all the way back with a4" downpipe from turbo.

It has a BD exhaust brake with the switch on thegear shift and works amazingly. Hardly ever haft to use your brakes with it on.

It has adjustistable rear suspension air bags and they work nice when hauling.

The carrier bearing started getting a lil loose so Ireplaced that 2 weeks ago.

It has a 4" lift kit with 36x12.5x16 MickeyThompson Baja Claws on it right now but I also have a set of 17" rims thatgo along with the truck(tires are shot).

The bed is rhino lined as well as the whole bottomof the truck.

As for interior it’s not the greatest due it beinga daily driver but it just needs cleaned up. The driver’s seat as a whole but thatabout it.

The truck has its little kinks but can be very verynice truck with little work.

It needs a fuel shutoff solenoid

The fuel gauge is off by a quarter and the Speedois off due to the bigger tires.

The 4x4 works awesome it just needs a new universalso the front driveshaft is in the bed at the moment. Hasn’t had the time to putit back in.

The door lock actuator went out on the driver’sside door and will need a new one.

The truck is quick, gets up and goes, and will pull anything, even with what work has beendone to it now. I know there is some things that I’m forgetting and I haven’thad it dynode yet but I’m guessing it’s around 450+ horse and you can see the gaugebuild 50 psi of boost with no problem when you want it to. She has a lot ofpotential just not right in my circumstances and I hate to get rid of it butfamily comes first. I’m selling the truck as is because of it being a 97.Thanks for looking and happy bidding.

I appoligize for the pictures and the confusion on the tires. The truck currently has the 36" micky T's on it with 16 in rims. It also comes with a set of 17" rims with smaller tires(as in most of the pictures) but the tires are shot. Thanks