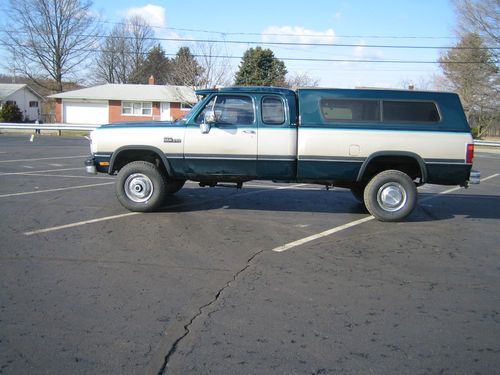 1993 dodge cummins 4x4 ext cab with fiberglas topper every thing works a/c cruse, heater , windows  radio, runs great, has banks turbo kit, recent transmission overhaul at 125.,000   minimal rust one spot on lhs front fender and drivers rocker, paint is fair fadeed on roof and hood good every where else, new cooper all terrain tires, gets 19mpg on highway 4wheel drive works as it should, , has lock out hubs, old school bullet proof , not many 1st generation cummins this solid, not a cream puff but not a beater with a heater , check out what these are going for recently on e bay, lots of potential with tlc, fraction of what a new one will cost you, real men drive 1st gen cummins, rest are for soccer moms and grocerie getters, duromax and powerstrokes are for the scrap dealers. real junk if you do the math.. good trucks are not cheap, cheap trucks are not good