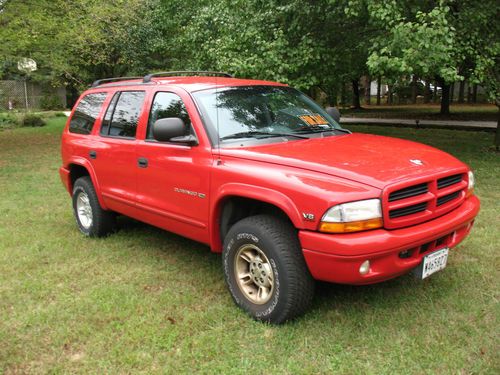 Condition: UsedA vehicle is considered used if it has been registered and issued a title. Used vehicles have had at least one previous owner. The condition of the exterior, interior and engine can vary depending on the vehicle's history. See the seller's listing for full details and description of any imperfections.Seller Notes:"I AM THE ORIGINAL OWNER OF THIS SUV. IT HAS 80K ORIGINAL MILES. AMENITIES INCLUDE KEYLESS ENTRY, HIGH/LOW RANGE 4 WHEEL DRIVE WITH POSI. REAR, 5.9L MAGNUM V-8, TOW PACKAGE, 3RD ROW SEATING, POWER OUTLET AT REAR STORAGE AREA, POWER DOOR LOCKS, CLOTH SEATS, 6 WAY POWER DRIVER'S SEAT, FOG LIGHTS, PWR. HTD MIRRORS, FRONT AND REAR AC, DUAL AIR BAGS, ROOF RACK, REAR WIPER AND DEFOG, FULL SIZE SPARE TIRE, TIRE IRON AND JACK (NEVER USED), AND VERY GOOD RUBBER ALL AROUND. THE INTERIOR IS CLEAN AND IN BEAUTIFUL CONDITION. THERE IS SOME COSMETIC RUST ON THE FRONT BUMPER WHICH I REPAIRED AND PAINTED, AND A COUPLE OTHER AREAS BEHIND THE FENDERS. NOT BEAUTIFUL, BUT THIS VEHICLE IS GOOD MECHANICALLY IN EVERY WAY. I HAVE AN EXTRA SERPENTINE BELT WHICH WILL COME IN HANDY IF THE OTHER ONE BREAKS IN THE MIDDLE OF NOWHERE. THIS VEHICLE WAS 32K NEW. IT HAS NOT BEEN ABUSED, AND WAS ONLY USED FOR FAMILY VACATIONS. IT WILL BE GOOD FOR SOMEONE NEEDING DEPENDABLE TRANSPORTATION FOR SEVERAL YEARS DOWN THE ROAD."

THIS IS A GOOD RUNNING POWERFUL VEHICLE WITH LOW MILEAGE (80K) FOR ITS AGE.  CLOTH INTERIOR IS ALL GOOD WITH NO RIPS OR TEARS,  SMOKING WAS NEVER ALLOWED.  IT HAS 8 SPEAKER STEREO SYSTEM, AIR BAGS, CRUISE CONTROL, TOWING PKG, ROOF RACK,  FOG LIGHTS,  4 WHEEL DRIVE WITH POSITIVE TRACTION REAR, REAR DEFOG AND WIPER,  ALL GLASS IS PERFECT,  HEATED AND POWER REAR VIEW MIRRORS, TIRES HAVE ABOUT 5K MILEAGE ON THEM SO PRACTICALLY NEW, KEYLESS ENTRY, TILT WHEEL 6 WAY POWER DRIVER'S SEAT, FOG LAMPS, 25 GAL FUEL TANK,  7 PASSENGERS  AND 9 CUP HOLDERS,  BOTH REAR SEATS FOLD DOWN FOR LARGE REAR CARGO AREA. USED FOR FAMILY VACATIONS ONLY.  A COUPLE OF EXTERIOR COSMETIC ISSUE AREAS, BUT NEVER AN ACCIDENT AND NO DENTS OR DAMAGE.  I HAVE THE ORIGINAL WINDOW STICKER TO PROVE ACCURACY OF INFO.  CONTACT ME IF QUESTIONS. THANKS, DAN.