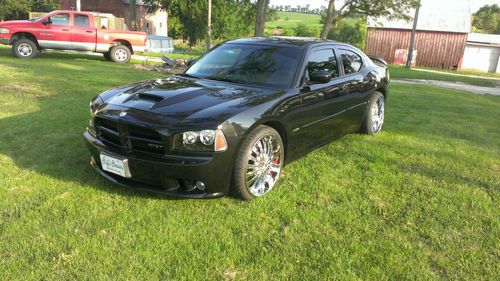 Condition: UsedA vehicle is considered used if it has been registered and issued a title. Used vehicles have had at least one previous owner. The condition of the exterior, interior and engine can vary depending on the vehicle's history. See the seller's listing for full details and description of any imperfections.Seller Notes:"Car is MINT! Looks like new except aftermarket wheels and tires excellent shape!"

I Am selling this car locally as well and reserve the right to end the auction at anytime and 500 deposit at sell and remaider due within 7 days and pick up within 14 unleImss other arrangements through me have been made! NO SHIPPING BUYER MUST PICK UP! Now that that is out of the way lets get to the car!

Selling my 2007 Charger SRT8 I have owned this car for 3 months absoulutely nothing wrong with the car it only has 21000 miles and counting since I do drive everyday! Im just more interested in the new body styles with the 6.4 or the Durango! Not looking to trade anything at this time there is a loan on the car but currently have title in hand! Car is in fantastic shape as you can tell by the photos. The Wheels are TIS 22" and cost 4000 new with tires! I do not have the stock ones car will sell with the wheels on it!  the tires are 295/25r22 and fronts are 265/30r22 with 90 % Tread left. Has navigation sunroof leather heated seats dual power seats everything except rear entertainment! Any Questions email me thanks