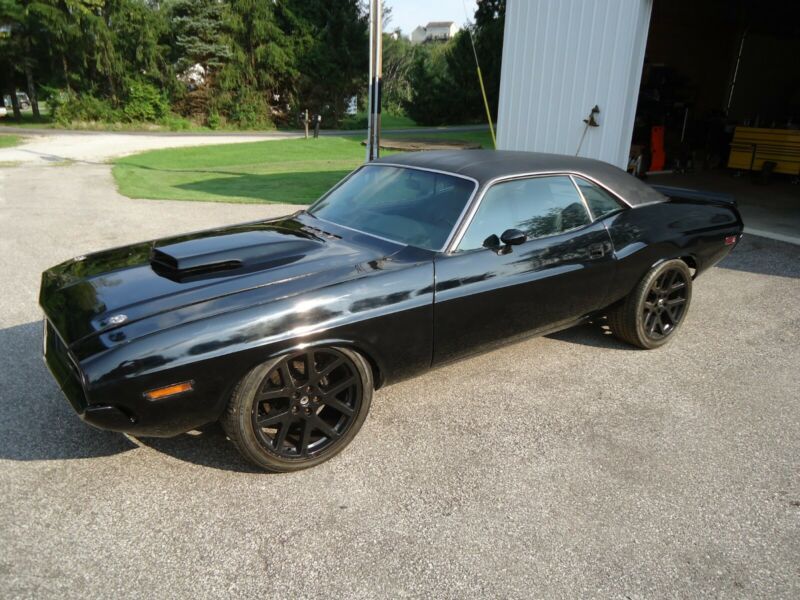 1970 Dodge Challenger with a 8.3 liter V10 from a Dodge Viper backed by a 6 speed Tremec and a dual disc clutch.
This thing sounds extremely aggressive with the help from Borla ATAK mufflers exiting out the rear of the car.

A custom driveshaft connects the transmission to the fully independent rear suspension.

The rear end of the car is totally custom fabricated. The frame rails that come up along the inner wheel wells were
replaced with a custom-built tubular chassis to accept the rear subframe from a 392 SRT8 Challenger. So now, the
completely independent rear end (suspension, differential, & brakes) from an SRT8 Challenger bolts right into a
1970 Challenger and you have a car that can drive and handle great. It also has coilovers in the rear and the
Brembo disc brakes that came on the SRT. The front and rear subframes are connected by square tubing to stiffen the
body for added stability and strength to help handle the power.

The body looks great in midnight black paint but does have imperfections from age and use, but it hasn't been built
up as a show car. Rear inner wheel openings were trimmed to fit larger tires on 20" wheels. Has a T/A hood and rear
spoiler. The vinyl gator top is original to the car and in good shape. The floors are also in good shape and the
trunk pan is new. Black interior is clean and it has a pistol grip shifter to control the Tremec 6 speed
transmission.