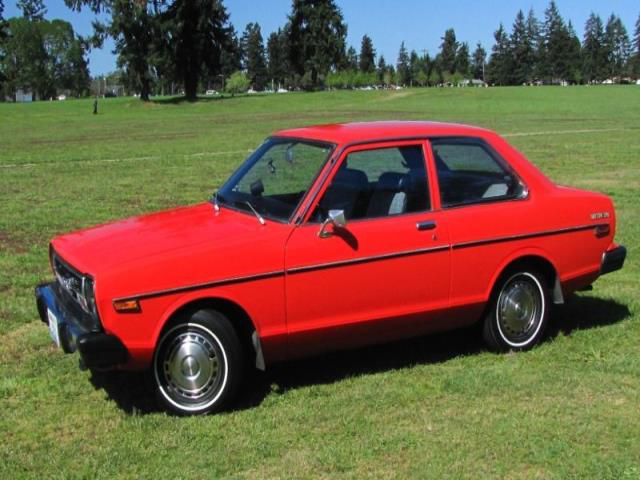 For Sale Worldwide No Reserve Auction Posting 2-Videos 1 of a Test Drive + inside & outside of the car Payment via PayPay Or Bank Wire Only 1979 Datsun 210 1 Owner Since New in 1979 It has a 4CL Engine that Runs & Drives Perfect W/ Manual 5-speed stick shift Transmission. The Miles on the car 74,282 are Mainly from being towed on the back of a RV in the 80's and the car still has the tow package on it and also has rear tow package that has never been used Always Garage Kept The Interior is in great shape as you can see for its age A/C Factory Air Conditioning Works & Blows Ice Cold as you can see in Videos No Pull in The Steering at All as you can see in the Video Paint & Body is Absolutely Beautiful as you can see in the pics and videos the Body panels are Original and so is The Paint No Rust at all on the paint & body Everything works great, headlights, break lights, turn signals and emergency brake, windshield wipers If you have any Questions Please Email me. Selling AS IS. I can help you arrange shipping arrangements or drop it off to the nearest transport if needed or I can pick you up from Seatac Seattle airport My PH# is 253-414-4726 I have a clear Washington State title in Hand Walk around Video>>> https://youtu.be/V-xSH8O2ykgVideo Test Drive>>>> https://youtu.be/7iO56Yo8eVc Thanks and hope to hear from you soon & Good Luck