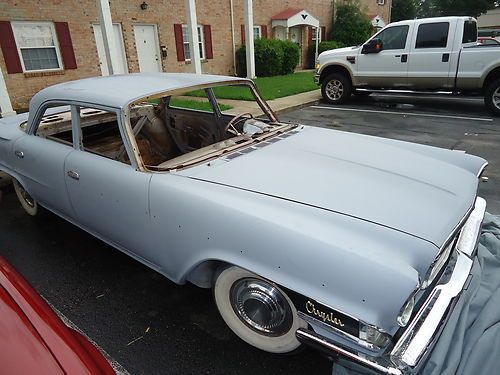 I am selling my 1962 Chrysler Newport starts and runs as is. I have had it for about 4 years. As you can see all the body work has been done and all the floor pans to include trunk pan have been replace. There is no rust on this car. . I have every piece of chrome the goes down both sides of the car, along with all chrome molding that goes around all the windows.I have all of the glass which is all in perfect condition. Complete rewire kit from bumper to bumper from painless. The car runs and drives great. Mopar 400 used block, brand new black carpet, seat belts, power window systems for all four doors, two arm rests, original dash never used or installed…front and rear matching seats redone all the way down to the coils. Hooker headers for dual exhaust and two flow master mufflers. Brand new radiator, ac compressor, 600cfm carb , chrome air cleaner. Brand new manifold, all seals for the entire vehicle brand new. I have boxes of more misc parts that will come with the car. Jeff 254-251-1214