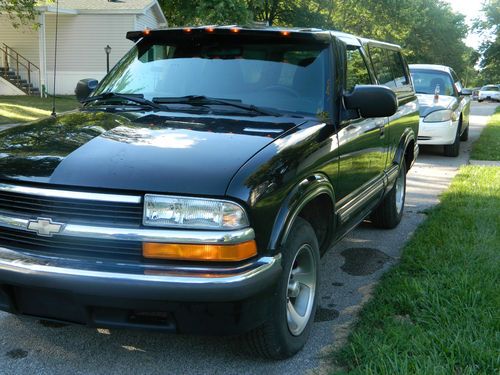 Condition: UsedA vehicle is considered used if it has been registered and issued a title. Used vehicles have had at least one previous owner. The condition of the exterior, interior and engine can vary depending on the vehicle's history. See the seller's listing for full details and description of any imperfections.Seller Notes:"has a dent in the rear bed. hard to see in pictures and not very noticable in person.has normal small dents and scraches nothing major."

hi up for sale is a nice black on black chevy s10. it has a sunvisor and window gaurds and a rear fiberglass camper shell. the milage is about 120000. im not sure what it is exactly. the lights burned out wh ere it shows what gear and milage. thats the only thing thats wrong. i just had the transmission rebuilt. this was done by a friend who owns a transmission shop . i was planning on keeping truck so when we rebuilt it we replaced everything . cluthes,bands sensors,pump. everything. u cant feel this thing shift it is so smooth! the only reason i am selling is my dad bought a new truck and i am buying his old one! the rebuild is less than a month old. you can drive this truck to califorina and back with no worries. its a great running truck that drives great and looks great. i always change the oil every 3 thousand miles it gets great gas milage. we took it to south carolina last year and it cost 85 .00 in gas going there to myrtle beach and had a half tank when we got there.. the air condationing is so cold with in a couple miles your ears and nose are cold.this is truely a great truck. you can see in pictures it is clean and so is the motor. no oil leaks or dirt or rust. no issues . i work for napa so all parts i have used thru the years was quality parts. you can bring what ever mechanic you want to verifiy what im saying is the truth. this is going to make someone a very nice reliable truck! i have truck listed on a couple other sites so if im offered a price i cant refuse i will pull listing before the 24 hour notice set by ebay.  good luck and thanks for bidding