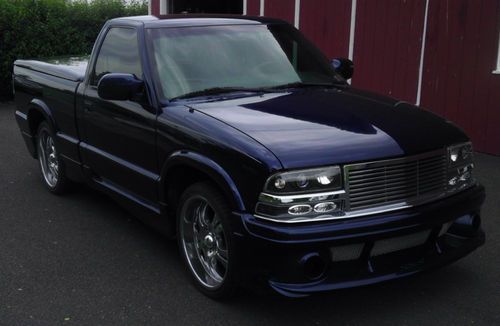 Condition: UsedA vehicle is considered used if it has been registered and issued a title. Used vehicles have had at least one previous owner. The condition of the exterior, interior and engine can vary depending on the vehicle's history. See the seller's listing for full details and description of any imperfections.Seller Notes:"Truck is in GREAT shape. Please review all the pictures. Some small scratches and chips most have been filled with touch up paint."

Up for sale is a 2001 Chevy S-10 Pickup. I have had this truck for awhile and have really enjoyed owning it, sadly it is time to move on. I am the Third owner of the S-10 and have taken very good care of it. The truck has 44,785 original miles and runs great. Currently it is kept in a barn under a car cover when I am not driving it. I have added some equipment including 20" Boss Rims and Tires, Xenon Body Kit, Hard Tonneau Cover, Satellite Radio, Headlights, Tail lights, K&N Cold Air Intake, Bed Extender, Bed Liner, Solid Billet Aluminum Shifter, Bazooka Tube, CD Player, Speakers. and Chrome Grill.

Also included are the original parts for the Headlights, Tail lights, Radio, and  Front Grill. Along with the original parts there will be included a second set of rims and tires (these are old and pretty beat up) extra front dashboard cover, Bucket Seats (drivers seat is power and has the wiring harness) and center console out of a 2002 Blazer, Two sets of Fog lights, Alarm system, and a auto dim rearview mirror.
The truck has a clean Vehicle History Report and has been very well taken care of. Please be sure to check out all the pictures and let me know if you have any questions. Bid with confidence, I have a 100% feedback score and have been an active member of the E-bay community for over 10 years.