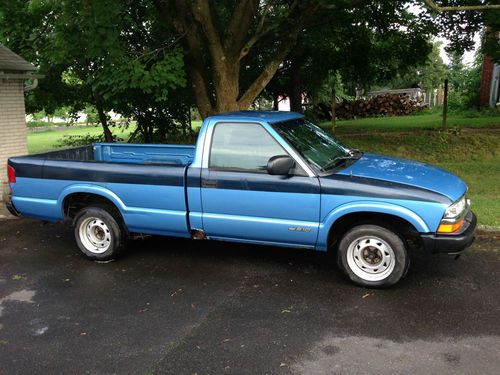 Condition: UsedA vehicle is considered used if it has been registered and issued a title. Used vehicles have had at least one previous owner. The condition of the exterior, interior and engine can vary depending on the vehicle's history. See the seller's listing for full details and description of any imperfections.Seller Notes:"Does not run. Rust spot on back of cab. Tailgate needs hinges. Dent on drivers door. Ding on front of hood."

Up for sale is my 2002 Chevy S10 with about 126k miles on it.  Its a long bed regular cab automatic. 4x2 with the better 700r transmission.  Also has the tow package on it as well.  The truck is about 90% complete.  When I got the truck the motor was seized (previous owner let it overheat)  I purchased a new motor and trannsmision from an s10 extreme with only 90k on it, that is the motor that is in it now (with new motor mounts).  The motor is just about finished from what I was told it only needs to be finished hooking up and maybe a few small odds and ends but nothing major.  When I purchased this new motor it came with everything attached to it, and it was all working.  The tailgate will need hinges so it can be properly secured, and my guess is it will need two new tires.  I am the second owner and before me it was a work truck that used to have a cap on the bed, so the bed is very clean. The reason I am selling it is the person I bought the truck for no longer needs it and my friend/mechanic who was working on it has moved away.

I would give the interior after a good cleaning a 9.5/10 it is very clean.

The truck will need to be towed as it does not run.