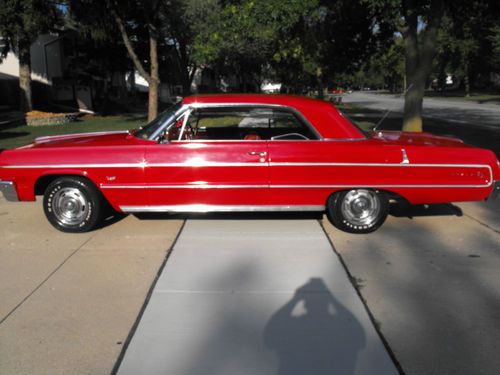 Condition: UsedA vehicle is considered used if it has been registered and issued a title. Used vehicles have had at least one previous owner. The condition of the exterior, interior and engine can vary depending on the vehicle's history. See the seller's listing for full details and description of any imperfections.Seller Notes:"has about 3 small paint chipped. really hard to notice. new trunk pan installed ,riveted but needs to be welded."

up for Auction is a 1964 Chevy Impala,it is a 2door hard top. It has the 283 orig motor just rebuilt with a rebuilt 350 trans.New exhaust from front to back.theres a new B & M shifter with both new universal joints.front brakes upgraded to slotted front disc,caliper,master cylinder and brake booster.new rear brake shoes,hardware,new chrome headers, wheel cylinders and new drums.new front and rear shocks. new fan andupper and lower control arm bushings. new upper and lower ball joints and new inner and outer tie rods and sleeves.new center link and idler arm and pitman arm. i just had the steering aligned.engine has a edelbrock carb, fuel pump, double timing chain,cam, intake and lifters.New gas tank and float. new radio & speakers. new rally wheels. horn and all lights work. local pickup only or must work out your own shipping arrangements  good luck....