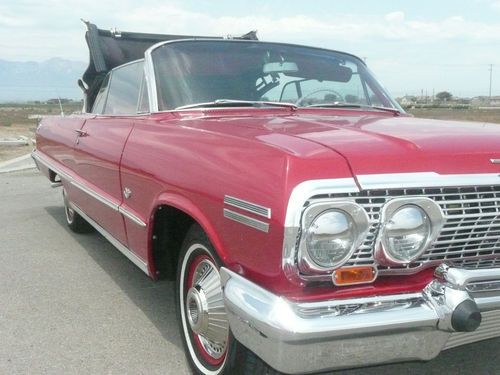 THE VEHICLE IS A BEAUTIFUL 1963 CHEVY IMPALA CONVERTIBLE WITH A 283CI ENGINE , 202/160 CAMEL HUMP HEADS AND 700 R4 TRANSMISSION. THIS VEHICLE IS A 1 YEAR OLD OFF-FRAME RESTORATION BY "GHOST RESTORATIONS" IN COMPTON CALIFORNIA.THE CAR ALSO HAS ICE COLD "VINTAGE AIR" FACTORY A/C, POWER SEATS AND POWER DISC BRAKES.  THIS VEHICLE WAS BUILT FOR MY FATHER WHO LOST HIS SIGHT DUE TO DIABETES.  ENCLOSED, ARE ADDITIONAL ITEMS REGARDING THE 1963 IMPALA CONVERTIBLE.