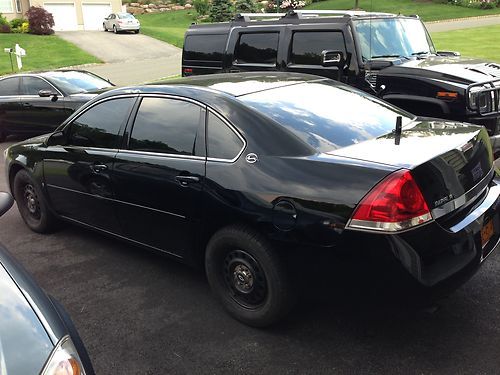 Condition: UsedA vehicle is considered used if it has been registered and issued a title. Used vehicles have had at least one previous owner. The condition of the exterior, interior and engine can vary depending on the vehicle's history. See the seller's listing for full details and description of any imperfections.Seller Notes:"Minor dings and scratches. (Ex police car) car recently serviced through chevy. Many new parts. Water pump/battery/thermostat/AC serviced/detailed interior tinted windows"

2007 CHEVY IMPALA POLICE 9C1 WITH LOW MILEAGE, 75K RECENTLY PUT THROUGH CHEVY DEALER FOR SERVICE. FLUIDS CHANGED, NEW WATER PUMP, AC SERVICED & BLOWS ICE COLD. CAR IS BLACK WITH GREY CLOTH BUCKETS IN FRONT AND VINYL IN REAR. INTERIOR IS IN GREAT CONDITION. RECENTLY DETAILED (PIC SHOWS SEATS REMOVED TO CLEAN FLOOR. CAR HAS THE DURABLE POLICE RUBBER FLOORS WHICH HAVE NO HOLES AND THEY ARE IN VERY GOOD CONDITION. TIRES ARE ALMOST NEW PIRELLI's. NEW THERMOSTAT AND NEW BATTERY JUST PUT IN. KEEP IN MIND THIS IS A FORMER NYPD POLICE CAR. DINGS AND DENTS ALL AROUND. NOTHING MAJOR OR RIPS IN BUMPER COVERS. BUT I HAVE TO MENTION THAT UP FRONT. EMAIL FOR PICS. IM COMMUTING WITH IT NOW SO MILEAGE WILL GO UP.