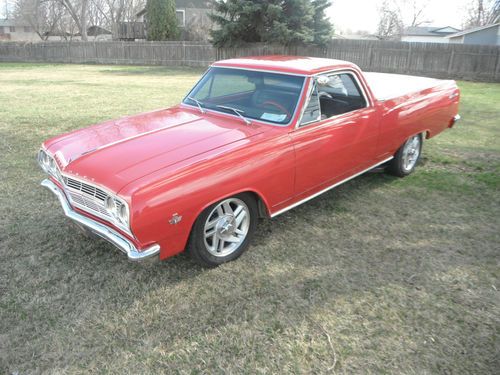 This El Camino has been restored and modified from the frame up. The body was removed and the frame stripped and painted. Then an independent rear end, custom exhaust, alumunium fuel cell in the rear, trailer hitch and more were installed. The body is nice and straight. The door handels are shaved and have remote popers. It has a tilt forward front hood that works great.The engine is a 350 that runs well. It has power steering, power DISC brakes, vintage air, custom stainless firewall, and hand made polished fan shroud. The transmission is a turbo 350. It shifts nice and has a B&M ratchet shifter. The interior is all new including carpet, seat, headliner, door panels, arm rests, and a painted dash with a tilt and telescopic steering wheel. This is a nice car and a fair price for all the work that has been done to it . $10,500 obo. Give me a call -Rick 208-870-3313 thanks