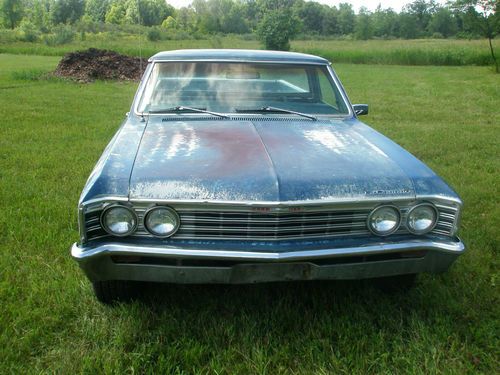 I HAVE UP FOR SALE IS A NICE RESTORABLE 1967 CHEVY EL CAMINO. I BELIEVE THIS TO BE AN ALL ORIGINAL 283 2BBL 2 SPEED ALL MANUAL ALL DRUM BRAKE TRUCK IN DRIVING CONDITION.
BODY HAS DINGS AND DENTS VERY LITTLE RUST
INTERIOR IS AS PICTURED ALL ORIGINAL EXCEPT FOR THE SEAT WHICH IS OUT OF A 76 MONTE CARLO ( DO HAVE ORIGINAL SEAT)
LIGHTS ALL WORK
WIPERS WORK NEW BLADES MISSING SQUIRTER PUMP
ENGINE IS A 283 2BBL WITH NEW OIL AND FILTER, REBUILT CARB AND INTAKE GASKETS HAS HEI DISTRIBUTOR IN IT NOW DO HAVE ORIGINAL POINTS IF YOU WANT.
TRANSMISSION IS A 2 SPEED POWERGLIDE IN WORKING CONDITION
EXHAUST IS NEW FROM MANIFOLDS BACK TO BUMPER WITH TURBO 2 MUFFLERS 2 INCH ALUMINIZED
BRAKES WORK AS THEY SHOULD NEW MASTER CYLINDER NEW WHEEL CYLINDER DRIVERS FRONT AND NEW FRONT SHOES
FRONT SUSPENSION CHECKED OUT GOOD
NEW SHOCKS FRONT AND NEW AIR SHOCKS REAR
WINDSHIELD HAS 2 CHIPS IN IT


ANY ???'S PLEASE ASK AND ALWAYS BETTER TO COME LOOK AND DRIVE FOR YOURSELF I'VE DONE THE BEST I THINK FOR DESCRIBING THIS VEHICLE.


WOULD RATHER HAVE CASH ON PICKUP THANKS