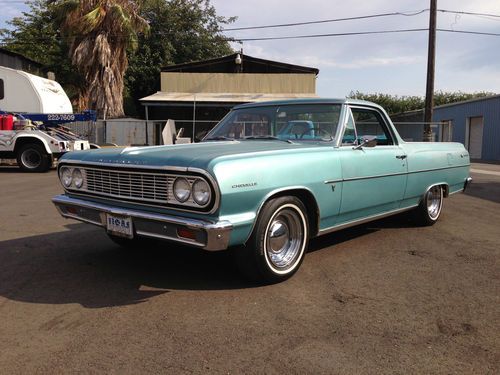 Up for sale is a really nice example of an unrestored 1964 Chevy El Camino Custom that I found sitting under a carport on a ranch outside of Stockton Ca. since the original owner passed away 3 years ago. I trailered it home and I've since did a full tune up, belts and hoses, heater core,  radiator, tires, front shocks and rear air shocks and went through the brakes. It has the original 283ci V8,  rebuilt powerglide transmission, 10 bolt rearend and dual exhaust. It runs and shifts really smooth. and drives down the road nice. The body is really straight with no major dents, looks to have had one repaint years ago in  the original color and the paint is peeling off the tailgate where the carport didn't block the sun at the end of the day.  It has factory air that is all hooked up but not charged. Original bucket seat interior and the carpet is faded. Both bumpers are nice and straight as is the grille and stainless trim. no rust not even in the floorpans. Also has P/S and P/B. Both door shut nice and solid as does the hood and tailgate. If you have any questions send me an e-mail. Thanks