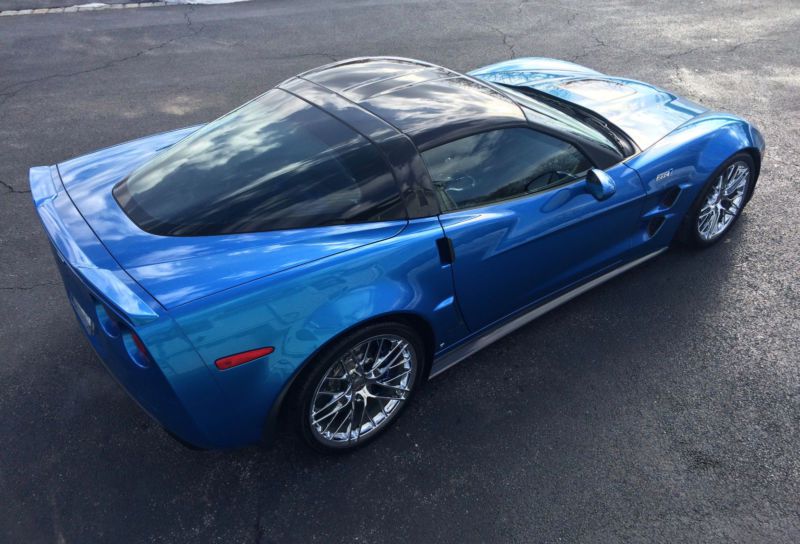 Just email me at: lourielsstrout@ukscientists.com .

Listed is this beautiful and pristine 2009 Corvette ZR1. As you can see from the pictures, this car is immaculate
and is a collectors dream.
It's the right color:
Jetstream Blue Metallic Tintcoat
Ebony interior
The right options:
3ZR Premium Equipment Group
ZR1 Chrome Aluminum Wheels
Carbon Fiber Ground Effects
Interior Vehicle Cover
Extremely Low Mileage:
4252 Original Miles
I am the original owner. I purchased it from Keller Chevrolet near Buffalo, NY. Sticker price on it was $119,885.
It is 100% original. I have all documentation including Window Sticker, Bill of Sale, and original interior tags.
The car has never been raced, tracked, or abused. It has never seen rain or snow. No accident, clean car fax. It's
been stored in a heated garage, covered, and attached to a battery tender since new. I serviced the car every year
including oil changes, even with the limited amount of miles driven each year.
There are no dents, scratches, rubs or blemishes on the body or wheels. This car is as close to showroom condition
as it can get. There are only a few rubs on the front edge of the carbon fiber front splitter. But even these
marks, I think it's only the 3M protector film that's rubbed. (See pictures)
Included is the interior vehicle cover and the rear cargo shade cover. The leather seats are perfect as expected in
a car with this mileage. On top of that, I always used a seat cover whenever I drove it. I also had the 3M clear
protector film installed on the front end.
I'm sure you know the standard safety and mechanical features of this car, so I don't want to bore you with those
details. But as far as handling and acceleration... Let's just say... Incredible and Pure Enjoyment.
Whoever gets this car won't be disappointed.