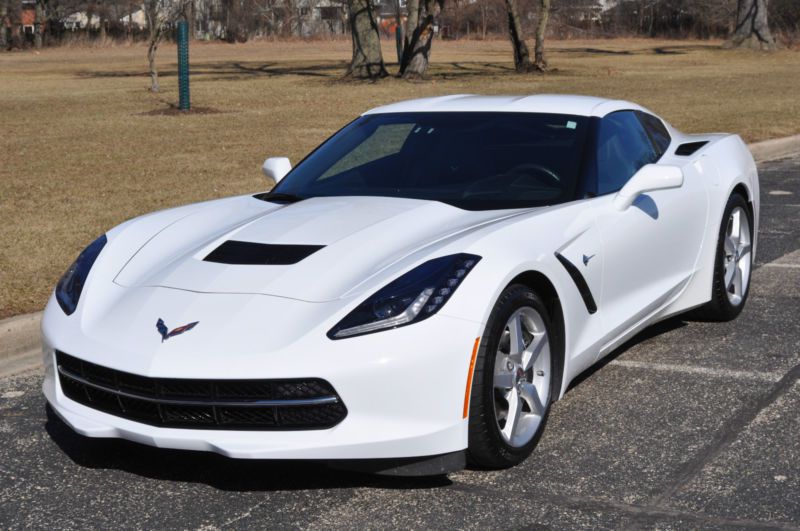 Send me an email at: melidammmancusi@scotshome.com .

THE CLEANEST, MINT, SHOWROOM CONDITION, ADULT ONLY DRIVEN, 2014 CHEVY CORVETTE (MANNUAL TRANS)
THAT IS FOR SALE. ONE OWNER VEHICLE, NON-SMOKER. THIS CORVETTE WAS JUST SERVICED LAST WEEK AT THE DEALER AND I HAVE
THE DEALER INSPECTION SHEET WHICH ARE ALL GREEN THE TIRES MEASURE AT 8/32NDS WHICH IS NEW, THE BRAKES STILL MEASURE
AS NEW. WE PURCHASED THIS VEHICLE NEW AND ALL SERVICE WAS PERFORMED AT JENNINGS CHEVROLET 241 WAUKEGAN ROAD
GLENVIEW, IL. THIS CAR IS FREE OF ANY DAMAGE, SCRATCHES AND SHOWS AND DRIVES AS A BRAND NEW CORVETTE. THERE IS
VIRTUALLY NO WEAR ON THE LEATHER INTERIOR OR CREASES. THIS VEHICLE IS CARFAX CERTIFIED AND HAS NEVER HAD ANY DAMAGE
OR PAINTWORK OR ANY ACCIDENTS-GUARANTEED.
THIS 2014 C7 IS ULTRA SEXY IN WHITE AND DEFINITELY TURNS HEADS. THIS C7 IS AS NEW AND DRIVES, IDLES, BRAKES, AND
SHIFTS AS NEW. THIS CAR HAS POWER EVERYTHING INCLUDING HEADS UP DISPLAY AND HEATED AND AIR CONDITIONED SEATS DUAL
ZONE AND THE NPP EXHAUST OPTION. INCLUDED WITH THE SALE ARE BOTH FACTORY REMOTES, ALL LEATHER BINDER/OWNERS
MANUALS/ WARRANTY CARDS, BALANCE OF FACTORY WARRANTY, CORVETTE CAR COVER (BLACK), THE FACTORY BATTERY TRICKLE
CHARGER THAT IS NEW IN THE BOX AND ANY OTHER PERTINENT PAPERS FURNISHED WHEN YOU PURCHASE FROM THE DEALER.
THIS CAR HAS NEVER BEEN ABUSED OR DRIVEN IN THE SNOW OR BAD WEATHER IT IS ALWAYS STORED IN MY GARAGE IN A
TEMPERATURE CONTROLLED ENVIRONMENT.
THE BIG BONUS IS THAT I AM A CAR ENTHUSIAST AND WITH THAT SAID, I WILL DELIVER THIS CAR PERSONALLY ANYWHERE WITHIN
THE CONTINENTAL U.S. IN MY 2016 ENCLOSED TRAILER TO YOUR FRONT DOOR AT NO CHARGE TO THE NEW OWNER WITHIN THE UNITED
STATES ONLY-(