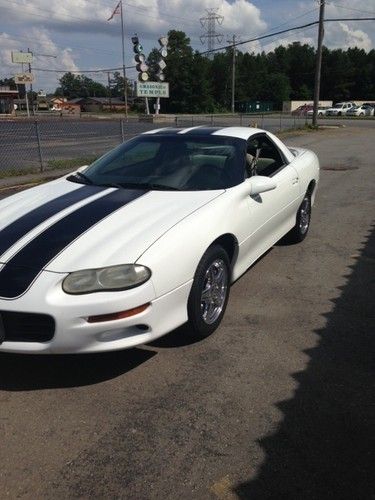 You are bidding on a 2001 Chevrolet Camaro with PS/PB, auto, AC, tilt wheel, AM/FM radio with CD player.  The car is showing 110,300 miles with a factory 3.8 V6 3800 and the car really looks like a low miles car.  This car is a last generation of this body style camaro.  This is probably one of the cleanest still around, the interior is extremely clean and smells fresh.  The carpet and seats are very clean.  The car is as shown, white in color with black racing stripes.  I'm sure without a doubt the stripes have been adding but look really good on the car.  The tires have a lot of tread and can't be too old and the wheels are factory GM chrome wheels that look flawless.  This over all is one of the best look 01 model camaro's I've seen.  Don't really know what else can be said about it, we are a family owned Used Car Dealership located in South Arkansas.  If we can answer any more questions please feel free to call at (870) 247-4707 Monday thru Friday from 9am till 5pm and Saturday's from 10am till 2pm or email at over300@ymail.com, undr300@yahoo.com.  Thanks and good luck bidding.