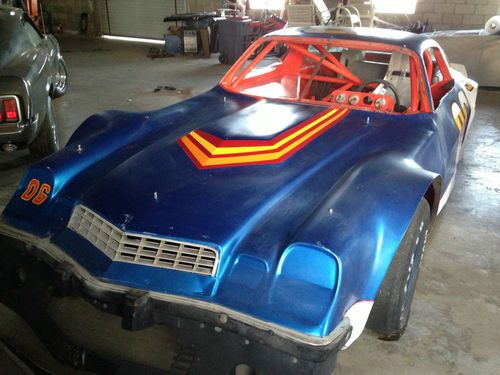 For sale is a 1978 Camaro race car rolling chassis. No motor, trans, brake calipers etc. What you see in the more recent looking pics is what comes with the car. I have also include some pics when the car was being raced so those may have parts shown that do not come with the car.  It is a purpose built race car and did not start out as a Camaro so it has no title. This car was built and driven by Bill Osborne, builder of the famous Big Red Camaro. You can even see that the motor builder of Big Red (Larry Mollicone) was used originally by the graphics on the original hood. Larry is still in business to my knowledge so if you need another motor built by him, I can get you in touch with him. I can see that Bill was not the last person to work on this car as some of the welds in some areas are a bit rough and is not representative of Bill's top notch fabrication. As you can see by the pics, the car need some work but all the important parts are there like the frame and suspension. Bill is known for his amazing chassis skills so this car should handle like no other after it is finished. These Camaros are wildly cool looking and this one will be a blast to drive after it is done. Sadly, the logbook is missing. There is a pic attached of it racing at Riverside though. I just have too many projects and not enough space so this bad boy has to go. I already have 1 Corvette and two Mustangs built or designed by Bill and  they are all amazing vehicles on track. If you have any questions about what does or doesnt come with the car, please email. I will be posting this in other places so may need to cancel this listing if it sells elsewhere.