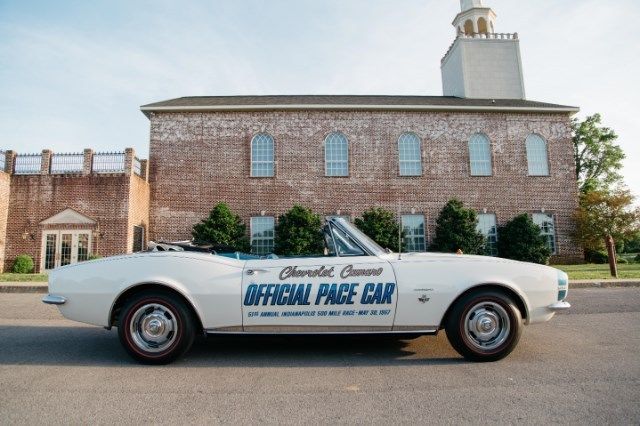 Feel free to ask me any questions about the car : fannyfggolphin@ukpoets.net .This 1967 Chevrolet Camaro was born In Norwood Ohio. being #19 of 43 chosen to represent the Indy %00 Festival
Duties this car remains as original and factory Mint Condition as you can get. The entire car has been built from
the ground up with NOS Parts that are either original or date code correct. Including the
intake/manifold/carburetor & air cleaner. The entire engine,transmission, & rear end have been rebuilt. The
suspension and frame have also been blasted and repainted to original factory condition. EVERY bolt, nut, & screw
are factory correct and painted to match with original plating. The seats, side panels, and carpet were
reupholstered/replaced with reproduction interiors. All original Chrome was re-chromed. The car was finished in
October of 1996. In 1999 the correct shocks were found and placed on the vehicle. The Car is 100% complete and
ready for Show. It is Mint in EVERY way. we had offers of $95000 last year and they were turned down. 1 of the 43
cars recently sold at Barrett Jackson for over $123000. These are the RAREST of the Rare. and are Only going up in
Value. I have included many pictures as well as the festival Pace car manual for this specific car. It list
everything to be known about the vehicle. This car will come with a Placard as seen in the trunk as well as ALL
documentation for the rebuild and car cover. IT HAS NEVER Seen rain and is as clean underneath as above. The
vehicle has placed 1st in Multiple well known shows which are as follows...St. Luis Concours d'Elegance "Easter in
the Park" ,2001 Amelia Island Concours d'Elegance, 2002 Ault Park Concours d'Elegance, 2009 Antique Automobile Club
of America and many more. Again EVERY Nut and Bolt has been turned and is GM original or replated/rechromed.We
present a top shelf product and are here to serve you as the customer. We ARE up front and honest on EVERY
transaction and aim to please in every way possible.