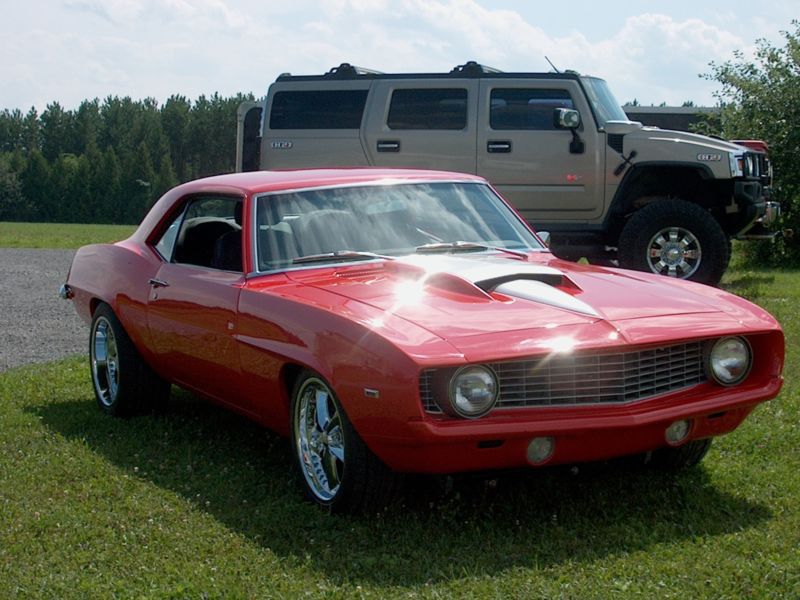 Feel free to email: brunabyyepes@scotshome.com . 1969 Camaro Pro-Street Recently Completed
I am sure there is nothing out there this like this car. It took 5 years to build and was done right in every way.
I bought the car originally in Wisconsin and sent it directly to Muscle Up Performance in Janesville, Wisconsin.
Check their website and you will some of the info on the car. Rich Bickle the owner and former NASCAR driver re-did
the body and built the chassis.
The full chassis frame was built the similar to the way NASCAR teams build theirs but without the full roll cage.
Full tubular design with mounting points to the original Camaro mounts. The mounts are solid and there is no flex
in the chassis or movement where it isn’t wanted. This keeps the suspension geometry exact continuously. The
shocks and coils are fully adjustable with ride height and car load. QA-1 products were used.
The front end has a Sweet power steering rack, tubular A arms, Heim joints at all pivot points, tie rod end and
ball joint locations. Brakes are Wildwoods best 4 piston calipers and large rotors.
Muscle up Performance took the car to bare metal and then gave it a perfect pain job in GM Corvette red. The hood
is fiberglass with a stinger scoop accented in silver. Really makes the car come alive.
The engine is a new crate LS6 with a 6 speed T56, The McLeaod hydraulic throw bearing was purchased to ensure
trouble free operation and simplicity for bleeding and operation. A 3 ½ inch drive shaft was sourced and connected
to Winters Ford 9" rear end with a 3.70 gear and posi. The 4 link suspension controls the movement of the rear end
again with QA1 coils and adjustable shocks, 450 lb/in used on the rear. Brakes again are Wildwood.
The black leather interior seats were taken from a newer GM vehicle with six way adjustment. The rears were
sectioned to fit and the complete installation looks factory. The door panels and console were done in a matching
black leatherette which was also wrapped around the original dash. New gauges were added and the overall effect
with the black low pile carpet giving it sporty but elegant look.
An aluminum rad with two electric fans was added to cool the engine.
All engine management and sensors were provide by Turnkey engines with a Painless wiring installation. They
certainly do a great job with their packages.
The car was complete last year and I drove it 60 miles to a local car shown. Having driven all types of performance
cars in the past 40 years this was one of the best handling and driving cars I have driven with a ride to rival
only the newest performance car designs. This is not the type of car I drove some 45 years ago when I got my
license. The first thing that I noticed after the build was there was way more chassis then engine. I then added a
Procharger Supercharger and ATI pinned balancer. A water to air intercooler, pump and cooler were added to help
cool the charge. The final inclusions were a water/methanol injection system, MSD coil packs and wires were added
to ensure a reliable spark.
The wheels are Foose 18 inch rim 8” in the front and 9.5” in the rear. The tires are 235/45x18 on the front and
rears are 275/35x 18.
The car has 0 miles with this set-up. I don’t have the time to enjoy all the vehicles I built and have now. The
car would cost more than $100K to reproduce as that is what I spent to date