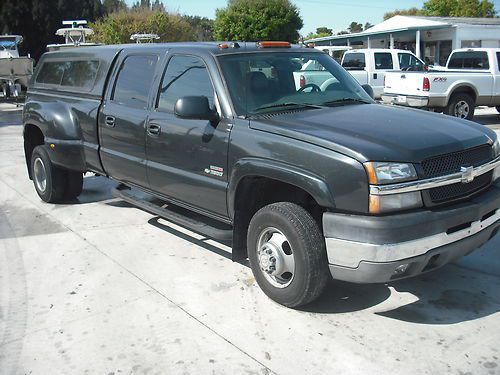 THIS IS THE KIND OF USED TRUCK YOU WANT TO BUY. ONE OWNER ELDERLY GENTLEMAN WHO TURNED 94 YEARS OLD TODAY. HE IS NO LONGER ABLE TO DRIVE SO THE TRUCK IS GOING UP FOR SALE. THIS IS PROBABLY ONE OF THE LOWEST MILEAGE DIESELS AROUND. THE TRUCK IS A CREW CAB, DUALLY, DURAMAX DIESEL, LT PACKAGE, 4X4 FULLY LOADED. AS FAR AS I KNOW IT HAS ALL OPTIONS INCLUDING LEATHER INTERIOR. I CAN'T FIND ANYTHING THAT THIS TRUCK NEEDS OTHER THAN ONE REAR WINDOW THAT IS STUCK AND WON'T GO DOWN. I'M NOT SURE THE REAR WINDOWS HAVE EVER BEEN DOWN SINCE THE TRUCK WAS NEW. DOESN'T LOOK LIKE THE BACK SEAT HAS EVER BEEN USED.......INCLUDED IS A REAL NICE TOPPER THAT WAS INSTALLED ON THE TRUCK WHEN IT WAS NEW. CONDITION OF THE TRUCK IS EXCELLENT LIKE YOU WOULD EXPECT FOR A 62000 MILE ONE OWNER TRUCK. THE TIRES LOOK LIKE THEY HAVE ABOUT A YEAR LEFT IN THEM SO TAKE THAT INTO CONSIDERATION.

CALL STEVE AT 772-201-1905 WITH ANY QUESTIONS UP TILL 11PM EASTERN TIME. COME ON DOWN TO SUNNY FLORIDA AND CHECK THIS BEAUTY OUT THEN DRIVE IT HOME. IT WAS 73 DEGREES THIS MORNING AT 6AM WITH A HIGH OF 85 DEGREES SO COME ON DOWN FOR A VISIT AND BRING YOUR WALLET OR PURSE. LOW BALLERS AND TIRE KICKERS ARE ALWAYS WELCOME AND ALL OFFERS AND TRADES WILL BE CHEERFULLY CONSIDERED NO MATTER HOW RIDICULOUS. THANKS FOR LOOKING AND GOD BLESS. 772-201-1905