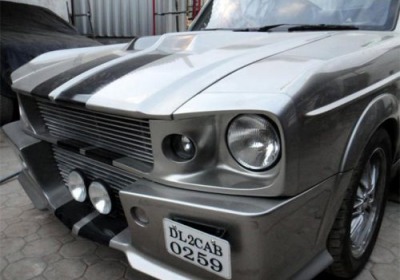 If you are a big fan of automotive oddities, this may come as a little treat. If you are a Shelby or Mustang diehard, prepare to have your sensibilities violated.

The master fabricators at BigDaddyCustoms are the minds behind what you see above. At first, it appears to be a slightly misshapen custom Mustang, modeled after "Eleanor" from Gone In 60 Seconds, but upon further examination, something appears to be amiss. In fact, the custom shop, based in India, has created an Eleanor replica grafted upon a lowly Chevrolet Optra. While it may take a second for the Optra to ring a bell, you should recognize its badge-engineered sibling, the Daewoo Lacetti, used on Top Gear.

We don't know what star would opt for the Reasonably Priced Car in Shelby's clothing, but it's clearly someone more concerned with the aesthetic than the performance credentials of this automotive mash-up.

This is not BigDaddyCustoms' first foray into aping a well-known automobile. The shop recently gained notoriety for constructing a Range Rover Evoque based on a Tata Safari. It's called the Moon Rover, and we're sure has the same all-looks/no-go formula as the "Eleanor" project.