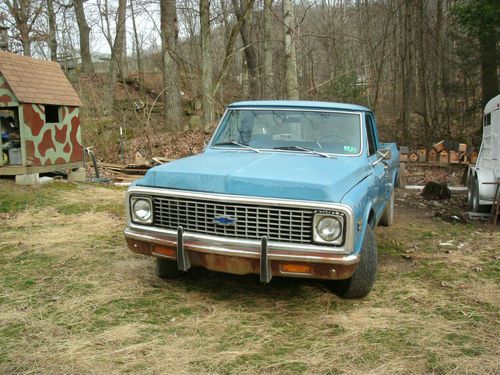 Dependable truck with 40,000 on rebuilt 350, has mild cam. Turbo 350 auto
FACTORY A/C !
Runs good has disc on front and drum on back
New exhaust put on in June 2012 single glasspack.
Excellent frame and cab mounts.
Needs a paint job, I have removed the chrome and that resulted in the spots of 3m tape you see in the picture.
I do have the chrome and a replacement fender where the drivers one is dented but don't worry there in no frame damage just damage                   to the fender. The hood isn't bent either it is just bolted slightly wrong where it doesn't line up so no worries there.
This is a very good old truck with the steel bed floor instead of wood ! The floor is solid and not all rotted out only a very spot near                          the cab, has new floor pans installed. Small rust just beginning to form on driver cab corner, passenger rocker, and a small spot above passenger rear wheel (smaller than a penny) Other than that it's solid. I currently have the radiator and fuel tank drained for the winter so nothing froze in the block and so it wouldn't be full of stale gas in the spring.
Item is for sale locally also. Buyer is responsible for pick up.
I may be interested in trade for Chevy Car, Truck, Blazer from 1930-1972   Also Jeeps Wrangler/CJ/Willy's/Keiser.
Or old Military vehicles you can contact me at (304)-237-5741 -Seth  before 10:00 P.M. Eastern Time (West Virgina)
Lowest Reserve on a C10 on Ebay so bid and win.
Sold as is with no warranty written or implied.