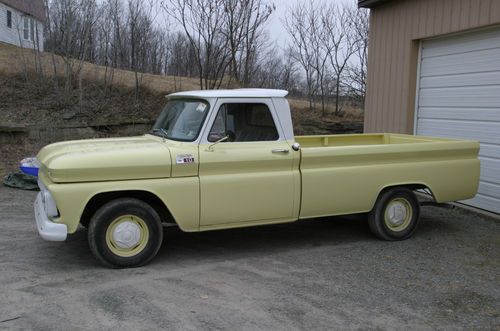 Condition: Used: A vehicle is considered used if it has been registered and issued a title. Used vehicles have had at least one previous owner. The condition of the exterior, interior and engine can vary depending on the vehicle's history. See the seller's listing for full details and description of any imperfections. ...
For Sale 1965 Chevy C10 Base Truck New Paint.

Paint job was just done this month. Fresh and Clean

Truck is a True Survivor from Texas. Runs Great and drives wonderful. I love driving this truck and I just bought a 1946 Chevy Pickup and will be using that. I drive my trucks. Not into the trailer Queen thing.

This truck had new front disk brakes put on. New exhaust engine to tailpipe All fluids are clean If you are the winner of this truck. Fly out and drive it home. This truck is a coast to coast safe truck.

The truck came new with A/C that still works. When I put the new distributor on in January The a/c bracket for the belt tightener will not fit. I was going to make on from scratch. I was not going to cut the original one up. The Truck never had a radio installed so no Antenna on the truck. The bed was removed for painting and everything was looked at by the body shop. He told me this is the straightest trucks he worked on for the year. When the truck was painted NO BONDO was used NO Welded Patch work. Truck was brought down the bare metal and the Etched Primed then primed again the painted with a correct to year Lt Yellow for the 65 c10 truck. I get people all the time looking at it. The truck gets about 20 miles per Gal and DOES NOT BURN OIL. The motor has a few oil wet marks from seeping around the gaskets.  Like new tires and rims are painted the same color with the hubcaps the same Ivory White. The trucks interior is nice new floor rubber and new rubber around the doors. Heat works great. No Cigar lighter, never came with one, no rear bumper, Never came with one. What is nice the truck is not a old truck fixed up to look nice but all original.

So look at the images and feel free to ask anything you like I will answer back to you. If you live in the North East area. Come look and drive.