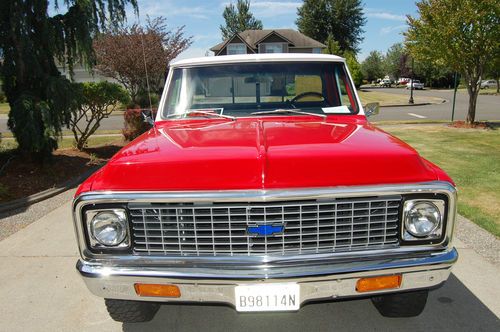 Condition: UsedA vehicle is considered used if it has been registered and issued a title. Used vehicles have had at least one previous owner. The condition of the exterior, interior and engine can vary depending on the vehicle's history. See the seller's listing for full details and description of any imperfections.Seller Notes:"PRISTINE"

This truck is a complete body off restoration. It started in 1998 and finished in 2010. It has rarely been driven and been stored. Original bill of sale from Speeding Chevrolet in Denver Co. Factory air, PS, PB, 350 V8. Almost $48,000 in rec'tsfor restoration. Done @ Extreme Body Conversions in Westminister CO. This truck is pristine, not a scratch. Everything rebuilt or new. Has 70,000 miles and a few hundred miles since completed. I am selling this for a friend so will have to refer to pqaperwork for ?'s.