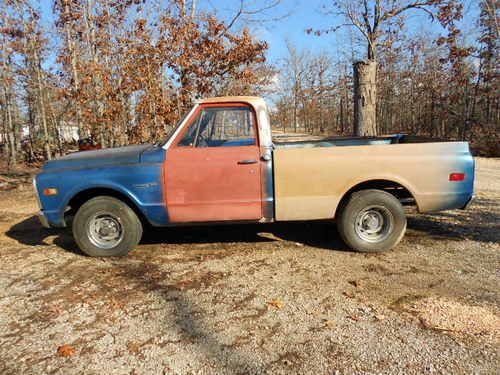 This is a great project truck!!It is 1969 swb chevy truck.As you can see it needs restored.Runs good.Needs brake work.Rust minimum.Does need a right front inner fender.Could use a right fender also.Left fender has small dents-but it is workable.Has straight tailgate ~Good shape,restoreable for a 1969!~all heat controls work!Has gauges.Good radiator~All glass but the windshiels is good!windshield has a crack in it~Also they made me put miles and do not know for sure how many!~There is a black piece in bed of truck-place in bed is just fine-it is old door pannel he left in it!Has power streering-he also has a complete power brake assembly to go in this!~you are welcome to come and look -also welcome to call!~870-895-2472~~Good shape,restoreable for a 1969!~This is my husband's truck-so you are welcome to call him and ask him any question you want too!!!body and vin numbers match-