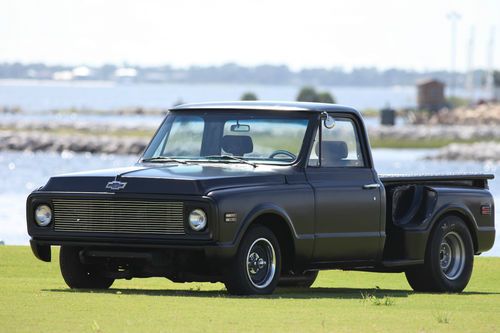 This is my 1969 Chevy C10 that has had an extensive amount of work and money put into it. I am offering it at NO RESERVE the highest bidder will win this truck. The body is in great condition and is very solid. The motor is a very strong and aggressive sounding 350 V8 that was balanced and blueprinted. This is a list of some of the work done on the motor its a 355- 10.5 CR balanced - 5.7 Rods with Flat Top Pistons- Double Hump Heads (2.02/1.60) - Lunati Hydraulic Cam (526/522 Lift & 249/241 Duration @ .050). It also has a Holley Double Pumper Carburetor, Holley Air Gap Intake and 3" exhaust. The Transmission is a Turbo 350 with a reverse manual valve body that was built and installed 3 months ago. The truck is equipped with power windows and power locks. The passenger window rolls up real slow, the door locks act up from time to time and I never got a door key with the truck but I never needed one. The pictures are taken with slicks on the back but I do have normal street tires for the rear. The truck has interior and under hood red LED lights that operate from a switch inside, along with a skull on the glove box that glows red. In the glove box is where the MSD Ignition is stored and the tuning screws are point out for easy access. This truck has the best of both worlds it has the Pro-Street - Rat Rod look with a very aggressive motor, than runs on 93 Octane, and can be driven every day and the rat rod look with some of the normal comforts of a custom truck. This is a great truck and turns heads every where I go. I own a couple of these type truck and I am just moving on to something different. Their are no disappointments in the truck and this is one you will start up in your garage just to listen to the motor!!!  I am selling it AS-IS and welcome anybody or inspector to look at it before the auction ends.