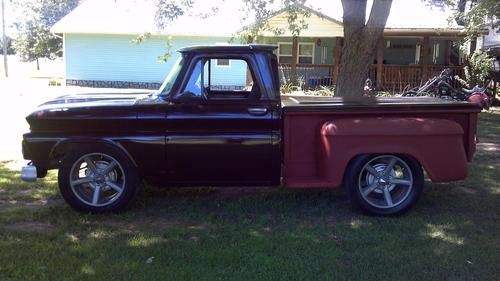 Condition: UsedA vehicle is considered used if it has been registered and issued a title. Used vehicles have had at least one previous owner. The condition of the exterior, interior and engine can vary depending on the vehicle's history. See the seller's listing for full details and description of any imperfections.Seller Notes:"project needing finishing, normal dents and scratches"

Up for bid today is a very easy project. This is a 1965 chevy stepside 2wd pickup truck. This truck runs and drives well, with a little more bodywork and paint, it could make a very nice piece. All of the rust was cut out of the cab and replaced with new metal. The floor pans have been molded and painted both underneath and inside. The original frame has been boxed and molded as well, and shot with a metallic silver base/clear. The truck rests on a set of 20” KMC wheels with good rubber. The wheels were powder coated silver at one time, and look good for a driver. Powered by a carbureted 307 small block chevy engine, coupled to a 3 speed manual transmission, the truck will run and drive good. It sounds nice with dual exhaust and glasspacks. The cab of the truck has already had all major repair done and was shot in a rootbeerish brown metallic color. The body has since gotten a few small dings and scratches. The bed is in red oxide primer, still needing some bodywork. The fiberglass bed cover was modified to fit the truck and looks awesome on it, although it could still use some bodywork as well. Hard wood and polished stainless look nice being used as the bed floor, along with harley Davidson brake lights out back. The inside of the cab is two-toned the rootbeerish color and silver metallic. A pair of bucket seats fit nicely, but could use covers to match. The truck does have a cd player in it with one speaker wired up for a little sound. Loads of new rubber keep the truck tight and dry. It does need an alignment and the tires balanced. A lot of time, hard work, and money has already been spent on this very nice driver. Loss of interest, bills, and other projects have lead to the point of selling this wonderful truck. It has a clear title ready to transfer. This truck is being sold as-is with no warranties or guarantees due to being used and the age. Please feel free to ask any questions prior to bidding. Any potential buyers are encouraged to come see the truck in person as well as test drive. A $500 non-refundable deposit is required within 48 hours of the ending of the auction, with the balance to be paid in full in cash upon pickup. I cannot/will not ship, that is the buyer’s responsibility. Thanks for looking!

THIS TRUCK IS FOR SALE LOCALLY ALSO, SO I RESERVE THE RIGHT TO END THE AUCTION AT ANY TIME!

the title says exceeds mechanical limits, so I assume the mileage isn't correct