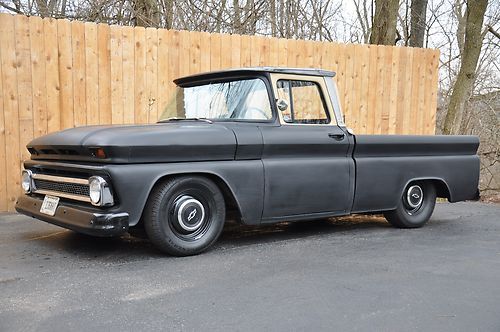 Up for auction is my 1962 Chevy C10 short bed with big back window. 1962 body is on a 1965 frame, so you have coil springs all the way around. Crate GM 350 with 330 HP mated to new 700R4 trans and 3:73 gears out back Truck runs real good on hwy. as well as around town. 700R4 has a shift kit and will bark into second almost every time. Carb is an Edelbrock 1406. Intake is a power plus manifold. Flamethrower hei distributor. Headers with flow masters that stop at the rear end. The truck has been rewired completely with a 12 circuit Hot Rod Wires wiring kit. The suspension is McGaughy drop springs/spindles up front and drop springs and 3" blocks in the back. Disc brakes up front. New rotors, pads, lines, master cylinder, brake booster, and proportioning valve. Rear drum brake system has been overhauled including new shoes, wheel cylinders, springs, and lines. Complete system was power bled.Brand new tires all the way around . New fuel lines and Edelbrock mechanical fuel pump. New radiator from Roppel. does not run hot.All new belts and hoses. This truck is virtually new and extremely reliable. It has been driven from Louisville to Champaign IL on multiple occasions with no problems.I drove it from Louisville to Cincy with no problems. Paint is Kirker Hot Rod black . New carpet inside with peel and seal sound deadener and insulation underneath.New door seals. All gauges working. The gauges have been replaced  with aftermarket, but installed them in factory cluster. The seat was reupholstered 2 yrs ago in black vinyl and gold metal flake vinyl. Body is not perfect, but the truck is driven regularly. New rocker panels, and door bottoms inside and out. Wipers work, it has a heater and defroster that work great.Has a clear Kentucky title. I know I'm forgetting something, text or call Larry at 513-673-5483 Bid to win I have a very reasonable reserve.

I also have the right to end auction at any time, due to funny business. I will help a shipper any way I can.