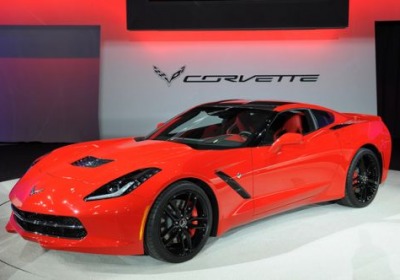 After months of speculation, Chevrolet has finally revealed the official starting price of the 2014 Corvette Stingray. The base MSRP for the 450-horsepower Stingray Coupe will be $51,995, while the Stingray Convertible will go for $56,995 (*both prices include a $995 destination fee). This means that the price increase from 2013 to 2014 is just $1,400 for the coupe and $2,395 for the convertible – pretty modest increases considering the upgrade in specifications. Of course, neither price accounts for the sort of dealer markup that might grace early C7 window stickers, especially since less than a third of all Chevrolet dealers will be allocated Corvette models to sell at the car's launch.

Now, these prices are for the base car, so if you're wondering how much a fully loaded Stingray will run, Chevy has given us a good indication of that as well. The coupe we saw on display at the Detroit Auto Show (shown above), for example, would run $73,360 including options such as the $2,800 Z51 Performance Package, $2,495 competition sport seats and the $1,795 Magnetic Ride Control option – just to name a few. Stepping up to the 3LT trim level that brings a full leather interior will run an extra $8,005 over the base price.

While $20,000 in options may seem like a lot, this "as-tested" price still has the C7 competitively priced against rival coupes like the Porsche 911 and Nissan GT-R. Speaking of price comparisons, Chevrolet also points out that the C7 Stingray Z51 costs $2,200 less than the C6 Grand Sport while delivering better acceleration (0-60 mph in less than four seconds) and improved track performance (including more than 1 g in cornering).

As for equipment at the base price level, Chevy says that the coupe and convertible come standard with a seven-speed manual transmission, Bose audio and those stylish HID headlight with LED running lights. The coupe gets a removable carbon fiber roof panel and the convertible will have the ability to lower its top remotely using the key fob. More information about optional and standard equipment can be found in the press release posted below.

DETROIT –The 2014 Chevrolet Corvette Stingray coupe will have a suggested starting retail price of $51,995, and the Corvette Stingray Convertible will start at $56,995. Both prices include a $995 destination fee, but exclude tax, title, and license.

"The 2014 Corvette Stingray perfectly embodies Chevrolet's mission to deliver more than expected for our customers," said Chris Perry, vice president, Chevrolet marketing. "The Corvette Stingray delivers a combination of performance, design and technology that very few manufacturers can match, and none can even come close for $52,000."


About Chevrolet
Founded in 1911 in Detroit, Chevrolet is now one of the world's largest car brands, doing business in more than 140 countries and selling more than 4.5 million cars and trucks a year. Chevrolet provides customers with fuel-efficient vehicles that feature spirited performance, expressive design, and high quality. More information on Chevrolet models can be found at www.chevrolet.com.