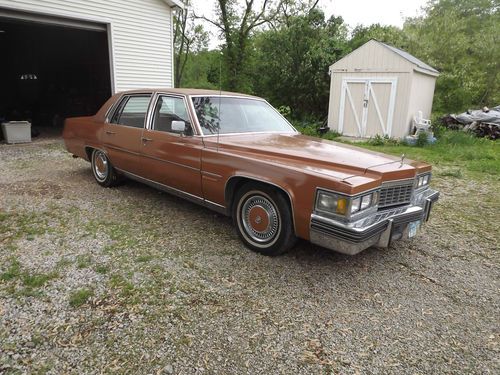 Here's a 77 fleetwood I just picked up from a town over.  The older couple owned and kept the car in their garage for several years after buying a newer one.  I don't have alot of knowelge about its history.  the clear ohio title has non-actual mileage on it saying 50000, the car odometer is showing 39000.  It seems to run ok I took it a short distance up our street.  It has sat and will need gone over prior to putting on road is why I put it as a project.  What I noticed and there may be more.  Needs tune up, small exhaust leak somewhere not loud but almost sounds like a manifold donut gasket.  probably oil changes, bests and hoses checked, brakes,greased etc...  The tires look nearly new.  I could'nt get the a/c or blower fan to come on so don't know about that.  The rear power windows won't work,and not sure if fuel guage is working.  Everything else seems to work including the power antenna.  The inside of the bottom of the the doors are rusted, not to a point where the seems are apart but have rust.  The rear plastic bumper filler panel is broken.  Under the car looks solid but with light rust from setting.  You should plan on trailing this home till gone over. Buying as-is please ask any questions before bidding.  Buyer pays in 5 days pick up in 30 days. in Kingsville,Ohio 44048