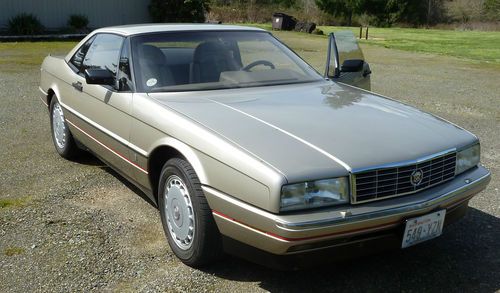 Condition: UsedA vehicle is considered used if it has been registered and issued a title. Used vehicles have had at least one previous owner. The condition of the exterior, interior and engine can vary depending on the vehicle's history. See the seller's listing for full details and description of any imperfections.Seller Notes:"This Allante is near perfect. Paint is perfect, all glass and trim is perfect."

You are bidding on an ORIGINAL 1990 Cadillac Allante. 88K miles, near new tires and battery, all maintenance records and manuals, original window sticker,and a BOX of additional Allante documentation. This car has no issues, both tops(hardtop was a $5000 option for this year), and has been garaged and babied all of it's life. The Allantes were designed and BUILT by world renowned car builder Pinnin Farina in Italy, the same company that builds Ferrari's.  The complete car minus the drive train was then shipped to the US on Boeing 747's where Cadillac installed the Modified, aluminum block, roller cam, ram air intake 4.5 L V8 and modified GM Transmission. The Allante has 4 wheel anti-lock disk brakes and electronic stability control, common now but unheard of in 1990. The interior is all leather, with Racaro seats. The hard top, trunk, and hood are made from swiss aluminum, to reduce weight.This Allante is very exotic and was sticker priced at $57,000+ when new. That being said, these cars are extreamly reliable and easily get 20+ MPG. It is a very smooth and powerfull automobile, with timeless styling. The car is garaged in Ryderwood, Washington, about 60 miles South of Olympia. Click below and read about it.