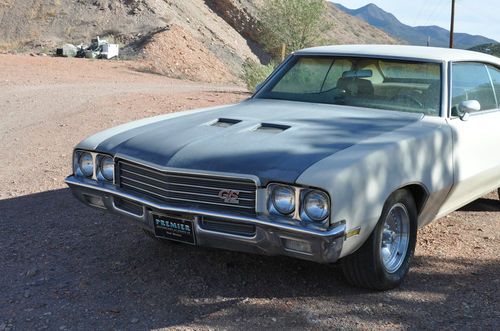 I have owned this buick for about seven years and belive iam the third or fourth owner. It is a local car, when i bought it i think it had abought 92000 miles on it and now has 97447. We do not get out much. Its title states a GS , but its not , its a buick skylark with cowl induction , full gauge pkg , BM shift kit , four core heavy duty radiator, electric fans, street strip electric fuel pump,grant steering wheel,faux cenerline wheels and bfgoodrich tires.has correct spoiler and factory mirrors. Car stars runs and a blast to drive , it needs a new loving owner to paint it yellow add the black stripe kit and the mid rise manifold could not hurt. It already has the edlebrook carb. the conditin is as follows , it would be fair condtion in kelly blue book old car guide, thirty footer. There is bondo on both sides ,wavy on the bottom sides. the interior needs to be redone , but headliner good and no springs or foam riped out. Dash has only one crack and has not been cut on for radios and such. When i aded the hod i never was able to buy the lighter springs. So there are no springs , also i did not buy the hood inserts, i did buy the correct air cleaner and foam feet, all complete. stickers too. for the price of this car and what they go for finished, even the clones its a great place to start. Buicks are rare.I have relisted this buick and added better pics , also lowered the reserve , we run a dog rescue and need monies for the animals, if it gets close to the price i will remove the reserve. this will make someone a good hot rod, i have over 6000 invested, thanks for looking.