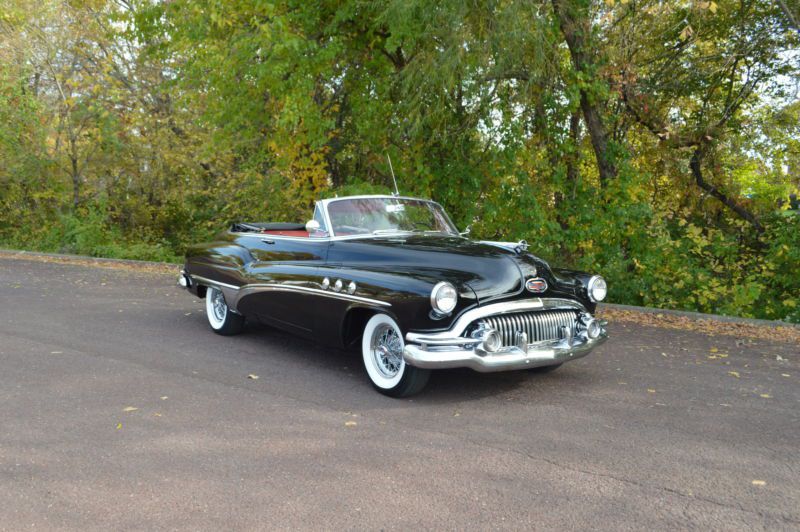 HERE IS SOMETHING YOU DON'T SEE EVERYDAY. A 1951 BUICK SUPER CONVERTIBLE. THE EXTERIOR IS IN GREAT SHAPE WITH THE
PAINT SHINING BRIGHT. THE WHEELS AND TIRES ARE IN GREAT SHAPE. THE INTERIOR IS ALSO IN GREAT SHAPE WITH NO RIPS IN
THE SEATS AND THE DASH LOOKING REAL NICE. THE 8 CYL. MOTOR RUNS VERY QUIET AND HAS PLENTY OF POWER FOR A LARGE CAR.
THE 3 SPD. TRANSMISSION SHIFTS NICE THROUGH ALL THE GEARS. OVERALL THIS IS A REAL NICE EXAMPLE OF A 51 BUICK. THE
CONVERTIBLE TOP GOES UP AND DOWN WITH NO PROBLEMS. ALL THE POWER WINDOWS FUNCTION AS THEY SHOULD. I WOULD SAY THE
NEXT THING THAT COULD USE REPLACING IS THE CONVERTIBLE TOP. IT IS SHOWING SOME FADING AND STICHING IS STARTING TO
WEAR HERE AND THERE. FOR A LARGE CAR IT DRIVES BEAUTIFUL.