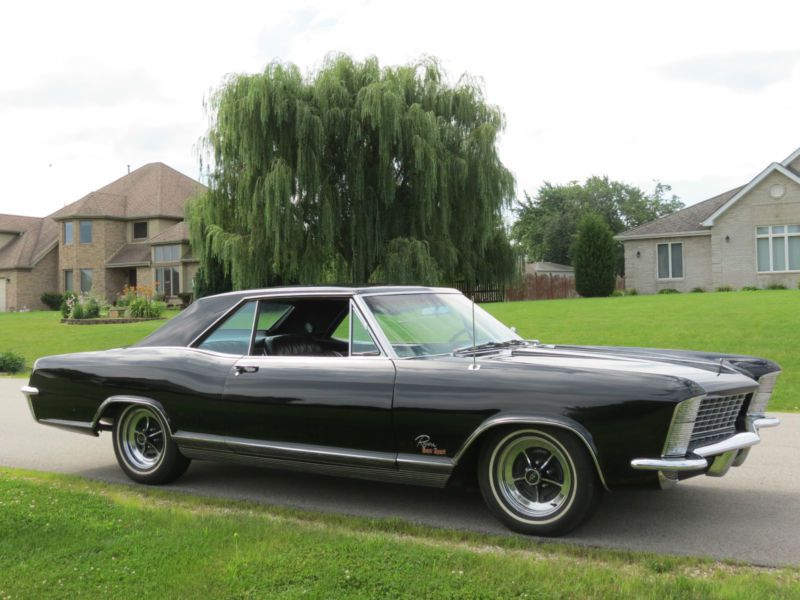 ANY QUESTIONS JUST EMAIL ME: grayceglleishman@devotedparents.com . BEAUTIFUL 1965 BUICK RIVIERA GRAN SPORT TRIBUTE WITH DUAL QUADS, RE-CHROMED DUAL SNORKLE AIR CLEANER & ALUMINUM
FINNED VALVE COVERS.I PURCHASED THIS CAR IN 2011. I SAVED IT FROM A VERY LONG STORAGE IN A MICHIGAN BARN. IT HADN'T BEEN REGISTERED
SINCE 1982. BUT TO THE OWNERS CREDIT, HE DID START IT AND YARD DRIVE IT PERIODICALLY. HE WAS THE 2ND OWNER OF THE
CAR & CLAIMED THE MILEAGE WAS CORRECT. BUT SHOWED NO PROOF OF IT. THE PAINT WAS VERY DULL. BUT IT ONLY HAD SOME
MINOR RUST IN THE LOWER REAR 1/4'S. WHICH I HAD PROPERLY REPAIRED PRIOR TO PAINT.
THE #'s MATCHING LT CODE 401ci NAILHEAD RUNS STRONG! MILD CAM, ALUMINUM VALVE COVERS & DUAL QUADS (WITH RECHROMED
AIR CLEANER) WERE INSTALLED IN 2012. NO LEAKS. NO ISSUES. NEW BELTS, HOSES, THERMOSTAT, DISTRIBUTOR CAP, ROTOR,
WIRES, PLUGS, AIR & FUEL FILTERS. 4 NEW WHEEL CYLINDERS, ALL 4 DRUMS TURNED & NEW FRONT BRAKE HOSES IN 2014.
REPAINTED IN 2013. STRIPPED TO BARE METAL, PRIMED & FINE SANDED. PPG BASE COAT CLEAR COAT WAS USED. IT CAME OUT
VERY NICE! IT IS STRAIGHT AS AN ARROW & HAS A MIRROR LIKE FINISH. BOTH BUMPERS WERE RECHROMED AT THAT TIME. ALSO
INSTALLED NEW HOOD INSULATION, TRUNK MAT SET, TRUNK BOARD SET, DOOR & TRUNK WEATHERSTIPPING. YES, I HAVE A LOT OF
MONEY INVESTED INTO THIS CAR!
IN 2014 I INSTALLED A NEW HEADLINER, SAIL PANELS, REAR SHELF PANEL & FRONT SEATS WERE REUPHOLSTERED. I PLANNED TO
KEEP THIS CAR FOR A WHILE. SO I DECIDED TO MAKE MYSELF A MILD CUSTOM GRAN SPORT THE WAY I WANTED IT. I'M NOT A BIG
FAN OF THE ORIGINAL WOODGRAIN. SO I CHOSE TO CHANGE THE INTERIOR WOODGRAIN TO CARBON FIBER.
THE CAR STARTS UP EASILY, RUNS GREAT & DRIVES STRAIGHT! THE SINGLE REAR MUFFLER WAS REMOVED & IS RUNNING ON THE TWO
SMALLER RESONATOR MUFFLERS. I DID THIS TO GIVE IT A DEEP THROATY TONE. I THINK IT SOUNDS GREAT!
I HAD THE CLAMSHELL VISORS SODA BLASTED WHEN THE CAR WAS BEING PAINTED. BUT MADE THE MISTAKE OF USING A PAINT PEN
TO REFINISH THEM. AFTER A FEW WASHES MOST OF THE PAINT WASHED OFF. YOU CAN SEE THAT IN THE PHOTOS.
ITEMS THAT WILL NEED ATTENTION.
THE HEADLAMP MOTOR HAS BEEN PULLED & NEEDS TO BE REBUILT OR CONVERTED TO NEWER STYLE MOTORS TO OPEN THE HEADLAMP
DOORS. (There is a guy here on eBay that rebuilds them for $275. I've also heard some people claim to get them
rebuilt for under $150.) THE CLAMSHELLS OPEN & CLOSE MANUALLY VERY EASILY.
THE LEFT TURN SIGNAL DOES NOT CANCEL. SO YOU HAVE TO MANUALLY CANCEL IT.
THE POWER DRIVER SEAT STOPPED WORKING EARLIER THIS YEAR.
ALL 4 POWER WINDOW MOTORS WORK. BUT THE RIGHT REAR NEEDS TO BE ADJUSTED. SEEMS TO HAVE GONE OFF TRACK. BUT IS
SITTING IN THE CLOSED POSITION WITH NO ISSUE.
THE A/C COMPRESSOR & CONDENSER WERE REMOVED. BUT WILL BE INCLUED IN THE SALE. I KEPT THE COMPRESSOR OFF BECAUSE IT
BLOCKED THE VIEW OF THE RIGHT VALVE COVER. I LIKE THE WAY IT LOOKS BETTER WITHOUT IT.
ORIGINAL RADIO WORKS BUT NEEDS NEW SPEAKERS. I PLANNED TO UPDATE THE AUDIO SYSTEM BUT NEVER GOT AROUND TO IT. SO
THAT WILL BE LEFT UP TO THE NEW OWNER.
YES, THIS CAR COULD USE A FEW THINGS. BUT NOTHING THAT TAKES AWAY FROM IT'S BEAUTY. IT'S A GREAT CAR THAT YOU CAN
GET IN & DRIVE TO LOCAL CRUISE NIGHTS PROUDLY. I BELIEVE THAT THE NEXT OWNER WILL BE VERY HAPPY WITH THIS CAR.
ESPECIALLY CONSIDERING THAT WITH A MINOR ADDITIONAL INVESTMENT. IT WOULD BE A $35K-$40K CAR. THE ONLY REASON I
HAVEN'T COMPLETELY FINSHED EVERYTHING. I DON'T HAVE THE MONEY TO DO SO AT THIS TIME. WHICH IS THE SAME REASON I
HAVE THE CAR FOR SALE