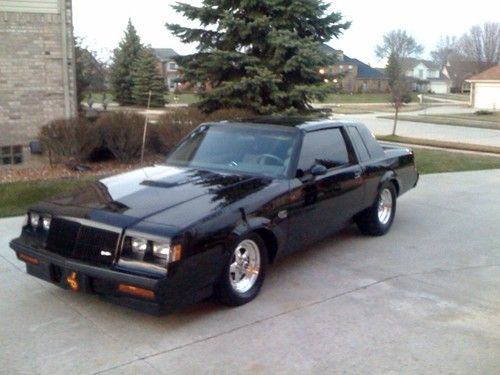 Purchased the car with intent to restore the 3.8 engine however I again have bit of more than I could handle,I am 62 and it just is too much with my declining health to finish,I paid a lot for this car but know I will take a hit on the cost.Has 4 new tires on it with less than 300 miles.Rides drives and handles great.Installed a new electric furl pump on the car a set of wires and a chrome K&N filter.Also have the chrome valav ecovers gaskets front just in case and the chrome timing cover set.Windows have the dark legal tint.Just a fantastic car for someone to finish and drive everyday without I depreciation since I is a clone.Has all the badges look at the pictures and you decide if you want the car.BIN price needs $500. deposit in 24 hours payment in full in 5 days thru Pay Pal.The car is an exact clone they had to have all the GN parts to put this car in this good condition.Has the Buick 5 lug wheels and Bick center caps.Also new rear brakes shoes and all of the mounting hardware.You could own a GN clone for 40% of a real one a actually drive it.Hagerty will insure the car as a modified auto.$#*85 a year witth $12,500. full coverage and zero deductible.I have ben on E Bay for over 11 yeas.

On May-21-13 at 00:04:26 PDT, seller added the following information:Forgot to mention that the car has the white face Auto Meter gauges with the bluelight for the back lighting,,another $900.00Great buy in this auto!