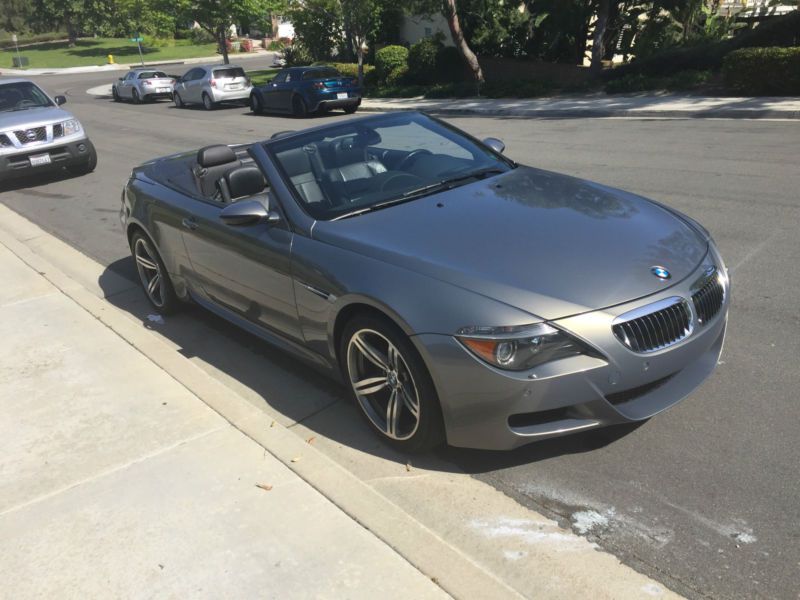 If you have any questions feel free to email: madiemnneace@englandfans.com .

Hello,
I am selling my baby it is a 2007 BMW M6 convertible.
It is fully loaded and fully stock, no modifications, accidents, or paint ever. I don't want to trade into dealer
so want to try to sell it first for a good price. I'm selling it because I am upgrading to the new one.
This is the best car that I have ever owned and I have owned many cars.
Transaction must be completed at bank with cash, no test drives without proof of funds.
Clean title in hand, no accidents ever and never painted or modified ever.
Features/Specs:
-V10 formula 1 inspired hand built motor with 500 HP (Sounds Amazing)
-M Sport Suspension
-SMG 7 Speed Manual/Automatic Transmission w/ paddle shifters or sport shift
-M mode with over 20 fully customizable drive modes linked to a memory button (Amazing)
-Keyless go, keep your keys in your pocket the whole time
-Navigation and back up sensors
-Bluetooth Audio (Custom Installed, auto pairing)
-Harman Kardon Logic 7 Sound system (Sounds Amazing)
-One touch everything, auto dimming everything, rear glass window
-Auto sensing wipers
-Heads up display in the driver windshield
-Full computer with idrive
-Whole interior leather wrapped and stitched with M stitching
-Xenon headlights that turn when you do
-Car has a hairline crack in passenger windshield, see pics.
The ultimate convertible sports car, too many options to list, must see to appreciate.
Can't begin to say how many compliments I get.

BMW i8 Spyder gets production nod

BMW could be poised to expand its i8 range, beyond the hardtop version of the plug-in hybrid supercar. A report from Bimmerpost is claiming that the i8 Spyder, which we showed you in concept form at the 2012 Beijing Motor Show, will be heading to production.
The website claims the open-roof fuel-sipper was shown to BMW management last Friday as a production-intent model. Other than that, there's not a lot to tell here. The i8 Spyder should feature all the same mechanical and aesthetic features found on the i8 Coupe, just without the confining nature of a roof. It's unclear when we'll see a production i8 droptop make its debut, although this certainly strikes us as the kind of car that should arrive at the Geneva Motor Show.
While an i8 Spyder does seem like a logical leap for BMW's i sub-brand, we're going to keep this one filed under the rumors category until we hear more.

BMW Gets Much Closer To The GT Look And Feel It Seeks
The 2014 BMW 3 Series Gran Turismo is being launched to a pretty cynical automotive press brigade. You know it. We know it. Heck, even BMW knows it. We've just returned from driving it on the rather unforgiving and sometimes nasty roads of Sicily, and even before we got behind the wheel, many of our media colleagues were busying themselves doubting the 3 GT's very raison d'être. So, despite the always excellent Sicilian hospitality, the day's atmosphere was kind of fragile.
While the press in attendance seemed determined to nail every product expert to the wall for having been even tangentially associated with the larger 5 Series Gran Turismo, it seemed that BMW decided ahead of time to not introduce such a sensitive discussion topic. That strategy would do little to smooth things over as everyone started digging for dirt on BMW's so far clumsy Gran Turismo franchise.