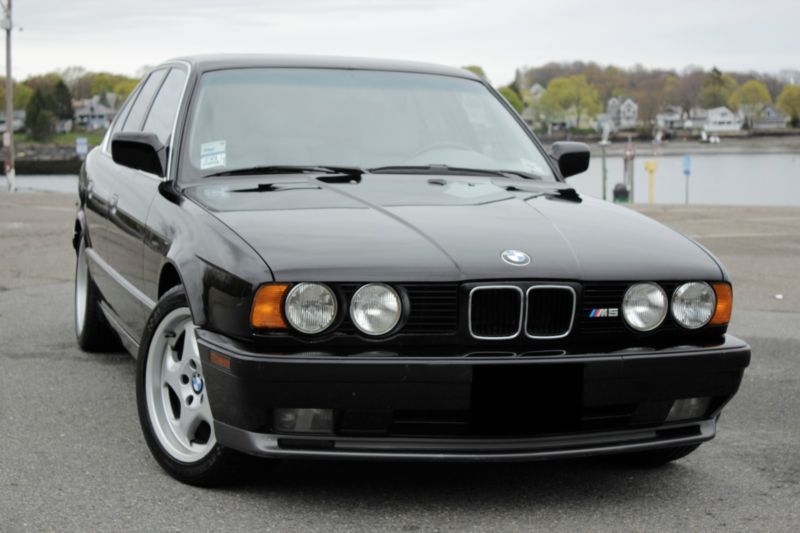 Stunning, low mile, all original 1991 (E34) M5 in excellent original condition.
Jet black exterior with dove grey leather interior. Zero rust. No accident history, no rips in the leather, no wear
in the headliner, no cracks in the dash, no dents. Everything straight, everything working. Always garaged,
meticulously maintained, and enthusiast owned. I am the 4th owner. Drives like a dream. Never raced.
If you're reading this, you probably know what you're looking at. The E34 M5 is a drop-dead beautiful, rare,
hand-assembled machine (the last such from BMW's M division) that is appreciating rapidly in the collector market.
In looks, it's the final, most sublime update of BMW's classic design language. In performance it's a beast with a
sublime screamer under the hood, a race-derived naturally aspirated inline 6 cylinder engine making 311 hp. In 1990
a new BMW M5 would set you back $56,600 plus options. Only 1200 were imported.
Working cassette stereo
Trunk-mounted CD changer
Self-leveling suspension
Never-mounted spare
All books, original window sticker, Welcome Cassette
Optional heated front seats both work
This is a truly clean, complete, and original M5. That said, it is also a 25+ year old car with typical minor
blemishes befitting its age: light wear to the driver's seat bolster, stone chips on the hood, curb rash on front
valance.
I've owned this car since May 2014. All service in that time performed by BMW specialist Gauthier Motor Werkes in
Ipswich, MA. Recent work and parts (from the past two years) include:
All 4 Michelin tires
Valve Adjustment
Valve cover gasket
Valve cover center gaskets
Oil pan gasket
New battery
Rear shock accumulators
Front struts
Sway bar end link
Fuel door hinge
Washer fluid level sensor
Recent life changes make selling necessary; otherwise this M5 would remain in the garage, while its value soars on
the updrafts of every close relation in the BMW family. (Consider recent trends in collectibility of this M5's
immediate predecessor, the E28 M5; its immediate successor, the E39 M5; and its contemporary, the E30 M3.)
I can't paste actual links into this listing, but because you need to kill a little more time at work, I recommend
the following:
Car and Driver 1991 review of the E34 M5
The epic chase scene in Ronin
Contemporary articles and reviews on mmm-five(dot)net
Hagerty value trends on a 1991 M5 in near-#2 condition

The Beijing Motor Show is just a couple of weeks away, and BMW wouldn't miss out on the opportunity to show off its latest wares to one of its most vital markets. So when the doors open in Beijing, BMW will showcase the new 2 Series Active Tourer, 2 Series Coupe, M3 and M4, 4 Series Gran Coupe and X4. It will also introduce the i3 and i8 to China for the first time. But those are all models we've seen already. What's new is... wait for it... the 7 Series Horse Edition.
Not celebrating horses so much as the Year of the Horse, this special edition 7 Series is based on the long-wheelbase model and comes with all manner of M equipment packages, a special paint job from BMW Individual and unique touches inside and out. BMW isn't saying which engine it features, but it sells the series in China in 730Li, 740Li, 750Li, 760Li and ActiveHybrid forms, with rear- or all-wheel drive. Given that the one pictured is wearing an xDrive badge, it would have to be either the 740Li or 750Li, but buyers will presumably be able to order it in whichever spec they desire.
While it may not be as exciting as the 9 Series concept BMW is rumored to have lined up for the Beijing show as well, you can bet that the Bavarian automaker will find plenty of buyers for this extra-special, extra-Chinese, extra-equestrian luxury sedan, and command a healthy premium from each and every one of them.