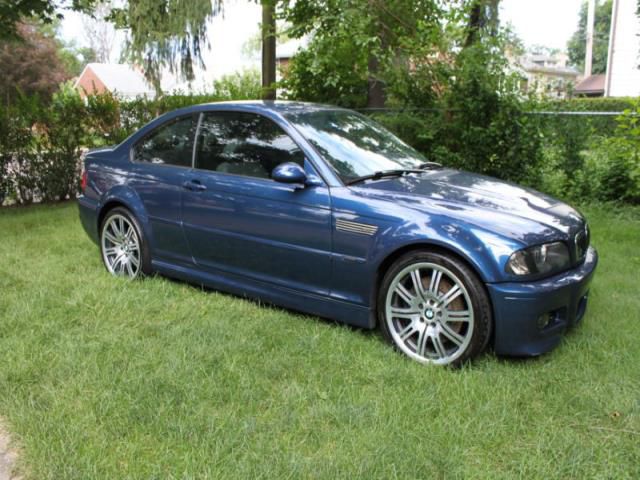 Up for sale is my 2005 BMW M3. Owned by me since 2011, Mature adult CCA member in a multi-BMW household. Rare lightweight options, no sunroof and manual seats. SMG, Harman-Kardon, 19” wheels. No accidents, subframe failure, SMG failure, Clean PA title in hand, both keys, BMW fitted car cover included in sale.Maintenance Highlights: · Inspection II done in 2012 at 65,000 miles, which included · New coolant, transmission, differential fluid, RTABS, RCABS, · engine and transmission mounts (Vorshlag polyurethane units), driveshaft flex disk · Power steering pressure hose replaced in 2011 · Valve adjustment performed in 2012, new spark plugs at this time · New front hubs at approximately 67,000 (right) and 69,000 (left) miles · New inner and outer tie rods and steering flex coupler in September of 2014 · New VANOS accumulator pressure line in September of 2014 · New Optima red top battery in April of 2016 · New struts, shocks, and front control arms as of July 2016 · Oil changes completed at 2-3000 mile intervals, or at least once a year. · OEM BMW European front bumper (deletes the front bumper reflectors)(Fall 2013) · Current PA · Tires are Hankook Ventus V12, 245/35 and 275/30ZR19 with 7/32 and 4/32 remaining front/rear Upgrades and Aftermarket Parts · Status Gruppe Tuning long tube headers (2012)* · OEM BMW European market 200 cell catalytic converters (2012)* · OEM BMW 330ci ZHP steering rack (faster 13.7:1 ratio over the stock 15.4:1) (2014)* · AFE Stage II cold air intake · Evolve Stage II tune (2013) · Alcantara steering wheel · OEM BMW “short” European style center console* · Vorshlag polyurethane engine and transmission mounts* · Turner Motorsports Power Pulley Kit* · *indicates stock parts are retained and included with the sale. Problem Areas: Car has a 2” scratch on the right rear ½ panel in front of the rear wheel that has been mended with touch up paint; The shadow titanium interior trim is peeling on the door handles and SMG paddles; There are a few minor dents in the roof rail trim; Clear coat on wheels is peeling in places, front wheels have some curbing. The car is beautiful and has minimal wear and tear and no rust. Driver’s seat is in great shape and minimal wear for its age. Paint shines like a mirror, and stands out among the silver, black and red E46 M3s that seem to be most common. Please contact me through eBay for more information and additional pictures. You will not be disappointed in this car!
EMAIL : sherwoodtufts6co@mynet.com

The 2013 BMW HP4 is the track-ready version of the manufacturer's already mighty S1000RR, which puts the bike at the very tip top of the two-wheeled BMW food chain. The R1200GS, meanwhile, is intended to be a somewhat more utilitarian machine. Capable of conveying both rider and gear over vast distances and uncertain terrain, the big-boy GS is the Swiss army knife to the HP4's rapier. Or at least that's what we've always been led to believe. BMW recently rolled out some footage during a press launch that showed the R1200GS is actually no slouch when it comes time to sling around a road course.
The company threw both bikes on Spain's Circuito de Almeria for a little sparring match, and miraculously, the HP4 didn't just up and walk away from the R1200GS. From from it. Instead, the two stay tightly matched through most of the course before something surprising happens. We won't spoil the ending for you. Is it possible the rider on the HP4 still had some in reserve? Sure, but from the sound and look of things, neither bike was giving an inch. Check out all the video action below for yourself.