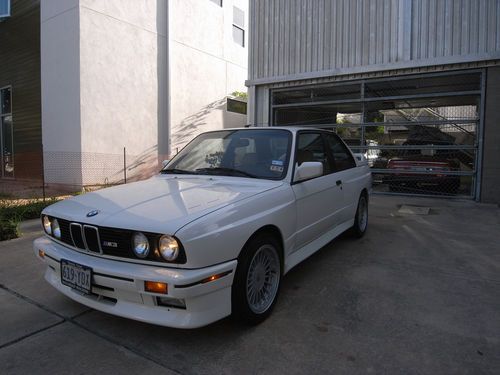 I am the second owner of this 1991 M3.  The first owner serviced the car at the dealership, and then at Bavarian Machine Specialties, the best independent BMW shop in Houston.

The wheels are authentic Alpina 16x8, one inch wider than stock.
The car has a few flaws:
The rear wing has cracks in the paint, as shown in the photos
The drivers seat has a small tear in the left bolster
The engine has a valve cover leak, and the crackle paint on the valve cover is peeling
The stereo was removed and replaced with a plastic stereo delete panel, as shown in the photo
A Clifford alarm system was installed by the previous owner, it is currently disconnected
Recent Service:
Replaced leaking rear trans seal
Replaced cracked driveshaft Guibo

BMW 2 Series, X5 get their M Performance parts on

BMW models come in a number of flavors, from their standard guises to M Sport variants and M Performance models to full-on M muscle machines. But if you want to pick and choose the degree to which you want your Bimmer upgraded along the path to M, BMW automaker offers its M Performance Parts line. The Bavarian automaker already offers these performance and stylistic add-ons for a number of models, and has now released new kits for both the 2 Series Coupe and the latest X5 crossover.
The catalog for the 2 Series includes an available lowered suspension kit, upgraded brakes, new alloys, carbon aero kit and interior trim enhancements. There's also a power kit available for the 220d model that squeezes out an extra 16 horsepower for a total of 200, and a limited-slip differential and exhaust silencer for the M235i.
Upgrades to the X5 crossover, meanwhile, also include a carbon aero kit and interior trim package. The X5 xDrive35i model also gets a power kit boosting output by 20 ponies to 326 hp and an exhaust silencer. Scope out the details in the pair of press releases below and the pair of high-resolution image galleries top and bottom.