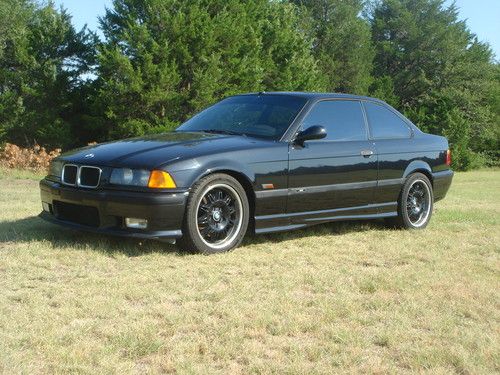 Condition: UsedA vehicle is considered used if it has been registered and issued a title. Used vehicles have had at least one previous owner. The condition of the exterior, interior and engine can vary depending on the vehicle's history. See the seller's listing for full details and description of any imperfections.Seller Notes:"THIS IS AN ORIGINAL HARD TO FIND IN THIS CONDITION 1995 BMW M3 SERIES!!!! THIS HAS NOT BEEN MONKIED OR MODIFIED WITH EXCEPT FOR THE ALPINE STEREO AND THE WHEELS ARE OFF A 1998 BMW M3!! THE WHEELS ARE POWDER COATED BLACK WITH THE OUTSIDE POLISHED!!! THIS CAR HAS NOT BEEN RACED!! ORIGINAL AIR CLEANER NEVER HAD A COLD AIR INDUCTION ON IT!!! IT APPEARS TO BE ORIGINAL WITH NO PAINT WORK DONE ON IT.. THE BODY HAS A SMALL DENT ON THE LEFT DOOR SHOWN IN THE PICTURE.. THE WINSHIELD IS CRACKED, I WAS GOING TO REPLACE IT BUT FIGURED THE NEW OWNER COULD PUT THE ORIGINAL GLASS BACK IN THE WAY THEY WANTED IT!!! I REALLY AM SERIOUSLY THINKING ABOUT NOT SELLING THIS CAR... I KNOW I CAN NOT EVEN REPLACE IT!!! 2 SMALL DIME SIZE DENTS ON THE HOOD, AND THAT IS ABOUT IT!! THE A/C WORKS!! BOTH WINDOWS WORK!! IT HAS THE ORIGINAL M3 SPARE TIRE!! THE TOOL KIT IS COMPLETE AND IN TACK!!! THE WATER PUMP WAS DONE AND DONE RIGHT ABOUT 3000 MILES AGO!!! AND THAT IS ALL I HAVE HAD TO DO FOR THE PAST 4 YEARS OR SO"

Upcoming new BMW X6 leaks out ahead of full reveal

The X5 may have been the first BMW crossover on the market when it arrived in 2000, opening the door to more high-riding Bavarians to follow, but it's been replaced twice over now. The X3 is on its second generation, and with the X1 having been introduced in 2009 and the X4 soon to hit showrooms, that makes the X6 - introduced in 2008 - the oldest crossover in the BMW lineup. But it won't be for much longer.
Soon BMW will reveal the all-new X6, based on the latest X5 but with that tell-tale slanted roofline. But before it gets the chance, a handful of images have leaked their way all over the Internet to give us an advance look at what to expect.
The overall shape of the new X6 comes across as familiar, if a bit less of an awkward take on the vehicle that (for better or worse) launched the crossover coupe segment. Up front the twin kidney grilles and headlights are larger, in keeping with the latest BMW design language, and the bumper less horizontal and more dynamic. Towards the back there's a sharp crease above the wheel arch blending into the more rakishly shaped tail lights, while the metallic vent behind the front wheel arch lends the flank an even sportier appearance.