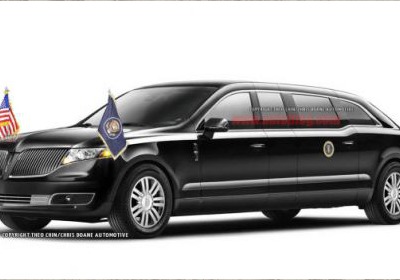 With recent news that the Secret Service has begun soliciting proposals for a new armored limousine, we've been wondering what the next presidential limo might look like. The current machine, nicknamed "The Beast", has a design based on a car that's no longer sold: the Cadillac DTS. If General Motors gets the job again, which wouldn't be a surprise considering the government still owns a chunk of the company, the next limo's shape would likely resemble the new XTS (below, left). But Cadillac hasn't always been the go-to car company for presidential whips.

Lincoln has actually provided far more presidential limousines throughout history than Cadillac. In fact, the first car modified for Commander-in-Chief-carrying duty was a 1939 Lincoln K-Series called "Sunshine Special" used by Franklin D. Roosevelt, and the last Lincoln used by a president was a 1989 Town Car ordered for George H.W. Bush. If President Obama wanted a Lincoln today, it would likely be an amalgam of the MKS sedan and MKT crossover, as illustrated above.


And what about Chrysler? The only record we could find of a President favoring the Pentastar is Nixon, who reportedly ordered two limos from the company during his administration in the '70s, and then another one, known today as the "K-Car limo," in the '80s after he left office. Obama, however, has a personal – if modest – connection to Chryslers, having owned a 300 himself before he took office. A 300-based Beast (above, right) would certainly earn the U.S. some style points.

Of course, we can only speculate about what the next presidential limo will look like, as what's under the skin is a closely guarded secret by the Secret Service. Like The Beast's rumored underpinnings, the next limo will probably ride atop a heavy-duty truck chassis, which any of our domestic automakers could easily provide.

See also: Cadillac logo losing its wreath?, Is it time for American carmakers to give up on dual-clutch transmissions? [w/poll], Akerson says Cadillac will get a larger sedan within two years.