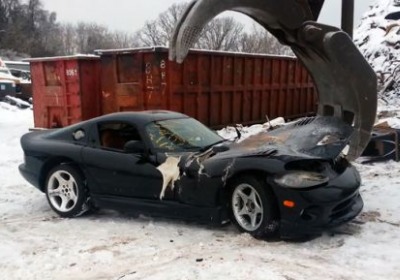 There's a scene in the James Bond movie, Casino Royale, where Daniel Craig's Agent 007 is captured by villain Le Chiffre, played by Mads Mikkelsen. Le Chiffre tortures Bond in a scene that is rather difficult to watch (especially for blokes) and impossible to describe on these digital pages (Google at your own risk). This video is the automotive equivalent of the Casino Royale torture scene.

It shows a Dodge Viper - a late, first-generation GTS judging by the center-exit exhausts - getting assaulted by a giant piece of heavy equipment. The large claw shows no mercy on the V10-powered sports car, rending its muscular curves into pieces and then running it over, just for good measure. It's a painful video to watch (and hear!), made worse because we don't know what the Viper did to deserve such a fate. About a third of the way through the video, the cameraman indicates that the man with the claw is a new operator from Chrysler, and it appears there may be some fire damage, but beyond that, we don't have much to go on.


Scroll down for the video but be warned, it isn't for the faint of heart.