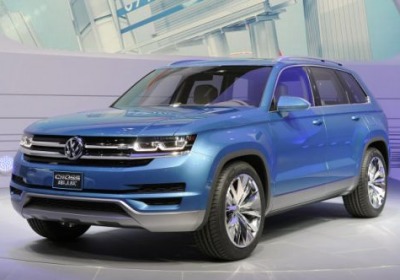 On the eve of the Detroit Auto Show, Volkswagen chief executive Martin Winterkorn has confirmed the imminent arrival of a new crossover. The model, previewed at the same show last year by the CrossBlue concept pictured here, will be unique to the North American market when it arrives here in 2016. The new three-row, seven-seat crossover is part of an ambitious expansion plan on the part of Volkswagen and Audi in North America, where the two brands aim to sell a million vehicles by 2018.

That's a mighty big increase over the 600,000 vehicles which the Volkswagen Group sold here last year, but it's moving in the right direction: That number is already a 100-percent increase of what it sold here just five years ago. At that rate, VW should have little trouble meeting its goals, particularly with the arrival of the new crossover and the introduction of Golf production at its assembly plant in Puebla, Mexico. Read the full statement below for more.

- CEO confirms midsize SUV for American market in Detroit
- Further momentum for US market with start of new Golf production in Puebla
- Group is to invest over US$7 billion in North America over the next five years
- Goal reaffirmed: One million vehicles from the Volkswagen and Audi brands to be sold per year in the US by 2018


Detroit / Wolfsburg, January 12, 2014 – "The Volkswagen Group is staying on course with qualitative growth." This was reaffirmed on Sunday in Detroit on the eve of the North American International Auto Show (NAIAS) by the CEO of Volkswagen Aktiengesellschaft, Prof. Dr. Martin Winterkorn, who announced a multi-billion dollar investment program in North America over the next five years. Furthermore, Winterkorn revealed that "Volkswagen's midsize SUV for America is on its way!" The CEO also reaffirmed the goal to sell one million vehicles from the Volkswagen and Audi brands per year in the US by 2018.

Winterkorn emphasized that the Volkswagen Passenger Cars brand was today better positioned in the US than ever before, adding that the production start of the new Golf "made in North America" would give the Volkswagen brand a further boost. He underscored that the Golf had never been so innovative or so efficient: "The new Golf features the latest generation of our TSI and Clean Diesel engines as well as electric drive and plug-in hybrid technology." Production for the North American market of one of the most successful Volkswagen models begins this Tuesday, January 14, at the plant in Puebla, Mexico, with the market launch scheduled for the summer.

That is just one building block in a multi-billion dollar investment program the company is initiating for the region. According to Winterkorn: "As a Group we will be investing over seven billion dollars in North America over the next five years." Another element in the growth strategy is an attractive brand-new model designed specifically for North America. In the presence of 350 guests in Detroit, Winterkorn announced: "I'm delighted to confirm what so many have been waiting so long to hear: Volkswagen's midsize SUV for America is on its way." He stated that development work on the seven-seater had already begun and that the US market launch was scheduled for 2016.

In light of this, the CEO made it very clear the Group's plans remained unchanged: "We have set our goal: Volkswagen Group of America aims to sell one million Volkswagen and Audi cars per year in the US by 2018. We are taking up the challenge – with confidence, total commitment and the necessary staying power."

Winterkorn said the Volkswagen Group was now also a force to be reckoned with on the key US market, and cited the Group's success as evidence of this: "The Group has almost doubled unit sales in the US since 2008, setting a new record of over 600,000 deliveries in 2013."

He went on to say that in the premium segment in particular, there was already no getting past the Volkswagen Group in North America: "Audi, Porsche, Bentley, Bugatti and Lamborghini – five of the strongest premium brands ever." Winterkorn commented that Audi had gone from record to record in the past 36 months and was now moving up another gear with models such as the Q3 and the A3 Sedan to be launched in the US this year as well as its own production plant in San José de Chiapa, Mexico. "And the Porsche legend in the US has never been stronger. Sales reached an all-time high of over 40,000 vehicles in 2013", Winterkorn said, adding that Porsche would be launching a promising new model with the new Porsche Macan.

"We want many more American drivers to feel at home with our Group brands and are working to achieve that with one hundred percent commitment and plenty of passion", Winterkorn said on the eve of North America's most prestigious auto show.